This isn’t why it’s called that, but I like to think Breathless is called Breathless because of its cutting style – everyone knows how fast, jumpy, and kinetic it is at times now, and even over a half-century following its initial release, this 90 minute film expels that creative and loose feel. I can see why this is considered one of Jean-Luc Godard’s and the French New Wave’s most iconic films, it is quite entertaining and viscerally appealing.

The events transpire over a couple of days in Paris. Michel (JEAN-PAUL BELMONDO) is a small-time thief who suddenly and casually kills a cop one day off the side of a road in a ditch. He meets up with Patricia (JEAN SEBERG), an American in the city selling the New York Herald Tribune. They have met before. She may be (and probably is) pregnant with his child. Or she may not be. Michel attempts to convince Patricia to flee to Rome with him, but Patricia has reservations, as she is worried of what criminal involvement or life might follow.

You get the sense that Godard only wants you to be an observer on Michel and Patricia’s story, he uses jump cuts and brief music cues to show that they are there, we are here, and that is that. That music, composed by the jazz pianist Martial Solal, has a moody kind of feel to it – it perfectly suits the characters and the visual style of the film as it rolls along.

And what is there to be said about the acting? Belmondo exudes a cool, simplistic, Bogart-like exterior as Michel, hiding a more complex interior that is only subtly expressed in conversations with Jean Seberg’s character, Patricia. Seberg is solid as the character, learning about Michel as a seedy character as we do. As she takes a back seat in the proceedings and depictions of Belmondo’s Michel, it’s clear the character of Patricia runs, only slightly, behind us as the viewer. Naïve, however, she is not, as displayed by her actions that eventually lead to the film’s end.

The story for Breathless was written, to an extent, by Claude Chabrol and François Truffaut (Truffaut is responsible for co-writing and directing The 400 Blows, my favorite of the films from the French New Wave I’ve seen). Godard made this picture in an off-the-cuff way. He would have ideas that he would have shot. As a result, depending on how many ideas he would have in a day, shooting could last anywhere from “15 minutes to 12 hours”. The execution of the actual story is disarmingly simple, perhaps a display of this method.

Reviewing Breathless for a 2013 audience as opposed to 1960 audience brings up a couple of big challenges. First off, what individual with at least a passing knowledge of mid-20th century cinema hasn’t seen this film? Even more have heard of it. We’ve already drawn our conclusions on it. Second of all, we’re much, much too used to the method of the editing, which many argue Breathless helped originate in most kinds of filmmaking. Just about any music video from about 1980 onwards is loaded with jump cuts, and countless mainstream action and less mainstream films-in-general have extensively experimented with unorthodox and non-continuous cutting in concept and definition. With all of that in mind, Breathless doesn’t have the same impact on me as it has with everyone who’s seen it. I see it as a point of reference, not groundbreaking. I wouldn’t call it anything less than important, but not exceedingly great.

Now that everyone has started to draft their angry comments, I feel this is a good time to start to wrap up. Breathless still pops off the screen after all these years, with its still out-there editing and handfuls of direct and indirect references to various books and movies. A certain part of that won’t ever go away, but it will become less relevant to the viewer as time moves on. We can read all we want about it and acknowledge what it means, but we can never have the same gut reactions as the first French audiences might have had on March 16, 1960. 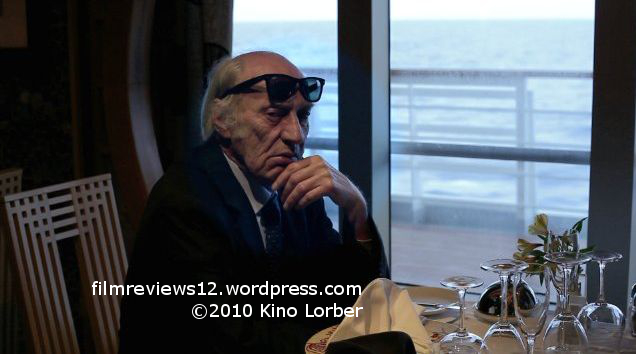 I, like many, regard Jean-Luc Godard as an authority on cinema, and for good reason. A filmmaker for over 50 years, his early work gives us some of the building blocks of contemporary filmmaking, as did his French New Wave colleagues. That is why I’m especially angry at Film Socialisme, his latest feature effort. It is among the most inconsequentially time wasting, pretentious, and pointless movies I have ever seen. Had someone like Godard not have been involved, I imagine it would have no supporters at all, instead of the devoted few that exist. But there are supporters, so more power to them, I guess. Or most of them. More on that later.

Film Socialisme is a film without a plot – on purpose. It is divided into three acts, or “symphonies”, one on a cruise ship, one on land featuring a family, and one simply detailing the various wonders of the world. Most scenes within said movements are unrelated to each other. Dialogue is nearly entirely in French, and is compensated with three word subtitles following a line, “Navajo English”, Godard calls it (either he’s referencing the World War II Native American code talkers, or the way they talk in old Westerns. Both are equally viable, but I have a feeling that it’s probably not even either of the two). (Example: what I’ve written in this paragraph so far might be: “noplot     foreign     three”, or something to that effect. Words are frequently combined, hence “noplot”.) Based on the subtitles, most of the conversations are about Europe, race, history, heritage, war, and politics (hence: “socialisme/socialism”). There is nothing I want more than for a fluent French speaker to watch this and tell me what the freaking thing was about.

There are some profound moments to be seen – a softly spoken conversation with “Pathetique” by Beethoven tinkering in the background on a piano is one that sticks in my head, but everything else is an incoherent (on purpose) mess (on purpose), alienating the stupid Americans (on purpose). And you have to give Godard at least minimal credit on the camera – the segments on a cruise ship are parts grainy closed-circuit video, high definition digital video, and some godforsaken footage, grainy and abrasive, shot on a bad cell phone. The first part of the film has a documentary vibe to it, where the dissolution of independence is found by herds of tourists flocking off to every pandering subject and pastime.

A refrain among some defenders of Film Socialisme is that the very objective of the film is up to the viewer, and those who dismiss it are conformist and follow the masses, like the above mentioned tourists. If anything, the tourists represent them, the aggressive Godard admirers – those trying to sway anyone who comes to an individual opinion on things like this, attempting to pull them over to their side and living out a scene on a dance floor, where 5 year olds run around following the lights. Their very argument is hypocritical, telling them what they are supposed to experience after saying that everyone will experience something different. Think Godard wouldn’t alienate his own obsessive-level devotees? It’s gotten to the point where I wouldn’t put anything past him. It’s not hypocritical on my part to point them out; I have nothing against those who like the movie in general, but the behavior of a select few must be condemned.

A review should read as a personal reflection and record of what the reviewer felt while examining the work critiqued, and in writing this, I convey the message that I felt the work of an aging man, while rightfully complaining about the things I believe he was complaining about, doing so in a wasteful and inaccessible way. This is a one star review, yet I still call for you to watch it if you are interested, and draw your own conclusions. I won’t deny that’s what it was made for.