“Bad Education operates with a smart, direct approach and a steady rhythm.”

END_OF_DOCUMENT_TOKEN_TO_BE_REPLACED

I wish I could tell you all about the ins and outs of the plot of The Prestige, but I won’t for two reasons: 1) I want you to experience this for yourself, and 2) There is so much here to explain that we would be here all day.

Instead I will simply point out that The Prestige is brilliant, engaging, and multilayered to a wondrous extent. While the story to tell is sometimes condensed to the 130 minute runtime to the point of being a bit muddled, and the ending verges on the ridiculous, enough excellent work is on display here to make this a highly recommendable and likable thriller.

Set at the turn of the century, we are introduced to Robert Angier (HUGH JACKMAN) and Alfred Borden (CHRISTIAN BALE), two stooges for Milton the Magician (RICKY JAY). They are employed to sit in at every show, and be the “volunteers” picked for a particular illusion, which involves tying up one of Milton’s assistants and throwing her in a tank of water. Once onstage, they tie the ropes in such a way that they are easily escapable. One night, something goes wrong, and she drowns in the tank of water, unable to free herself from the ropes. It is known that Borden was talking about tying the ropes in a different way.

After this incident, Angier despises Borden. They leave Milton and become rival magicians in their own right. Angier repeatedly works with stage manager John Cutter (MICHAEL CAINE). What follows is a story full of supreme magician one-upsmanship, each observing (and Borden occasionally sabotaging) their opponent’s shows.

It’s all very fascinating, as the screenplay, based on a novel by Christopher Priest, twists and turns, keeping a fair deal of intrigue throughout the picture. Yes, twists and turns. Make no mistake, the last half hour of The Prestige is loaded with plot twists, as the movie that begins in a nonlinear style slowly comes together and you understand the significance of the images shown at the start. Acting-wise, we’ve come to expect no less than the best from names like Hugh Jackman, Christian Bale, and Michael Caine. They certainly deliver here, with full fleshed and deep deliveries. Also good is Scarlet Johansson as Angier’s partner (domestic & professional), a character who becomes more complex than first thought.

Visually, this movie is magnificent. Wally Pfister is a truly gifted cinematographer, and each shot is filled and framed deliberately and solidly. The production and costume design is appealing and atmospheric. The effects are spectacular, particularly displays of the big bright creations of Nikola Tesla (DAVID BOWIE, in a good dramatic showing), his namesake coils in all of their bright, zapping, AC glory, employed for use by Angier during a climactic illusion.

I did, however, have one fairly-sized problem with The Prestige, and that is how what could have been one of the greatest third acts of recent memory has its brilliance riddled with rushed, muddy points and an ending with a few too many cop out qualities. I wish I could be more specific, but then the spoilers would flow freely, and the few readers that haven’t already fallen asleep from boredom would write irate comments. Suffice it to say a neater and more precise manner would have helped my view immensely.

Still, there is far too much greatness otherwise to let that gripe lessen the overall point of this review: The Prestige is a major studio film of high intelligence, with classic direction from Christopher Nolan, a mostly well crafted script, and finely tuned performances from all major players.

Apparently extremely loyal to its source, the plot follows Jean Valjean (HUGH JACKMAN, who does an excellent job), a convict in the midst of the French Revolution, serving time for stealing a loaf of bread to support his sister and her children. After being granted parole by Javert (RUSSELL CROWE, who does a very good job acting wise but a merely passable job singing-wise), Valjean becomes a factory owner. Several years later, we are introduced to Fantine (ANNE HATHAWAY, who delivers an especially good performance), a factory worker who sells hair, teeth, and body to support her young daughter, Cosette (ISABELLE ALLEN in earlier scenes, AMANDA SEYFRIED in later scenes). She is very ill – Valjean sees her one night and takes her to a hospital before she dies.

Then, another several years later, Cosette, now much older and adopted by Valjean, falls in love with a rebel, Marius (EDDIE REDMAYNE, who delivers a very good performance), but any type of optimistic ending is hopelessly stuck through the revolution, which affects all.

Highly publicized through this film’s ad campaign was the feat that all singing was done live on set, as opposed to the typical route of earlier recording a song and lip-synching it while filming. While being toted around as “the first” to have done it, research revealed this has been done three times before in musicals, with At Long Last Love (Bogdanovich, 1975), The Fantasticks (Ritchie, 1995), and Hedwig and the Angry Inch (Mitchell, 2001). Still, Les Misérables is the first musical to have live singing done on this grand scale of production.

Speaking of music, the movie, as you’ll know if you’re familiar with the musical, is nearly entirely sung through, which justifies the above method. The camera, whenever there is a song, will have the relentless ability to perform an extreme close-up on the actor singing at the moment – but this tactic only really worked twice (Hathaway’s spellbinding rendition of “I Dreamed a Dream”), and to a lesser extent, Redmayne’s “Empty Chairs at Empty Tables”). Regardless of its effect, thankfully no especially ugly people had to sing in this movie.

And speaking of the cinematography, let’s talk about it. Resorting to either the above mentioned ECU, long crane shots (usually signaling a change in set year), and indirect shots through translucent curtains, nets, or prison-like bars, which give an onlooker type of angle, which is retired after the first third of the production. Also? Shaky handheld camera which is often turned into said close-up, or a Dutch angle. The camera work here is extraordinarily schizophrenic.

A massive positive is the fantastic set and costume design which is quite apparent. Setting the mood well, detail is brilliant. The acting is covered in the plot, in a direct way. These are prime performances with actors to express great emotion and sorrow through their impressive singing.

The musical, which has been running worldwide for over a quarter century, was composed first by Claude-Michel Schönberg and Alain Boubil, translated into English by Herbert Kretzmer. They returned to the film production to compose one new song – just one, for the movie. However, one can’t help feeling it was just so it was eligible for an Oscar for Best Original Song, another nomination in the swarms this one will probably receive come January 10.

I’m going to end with a marginal recommendation for Tom Hooper’s latest production (Hooper also directed 2010’s Oscar-winning The King’s Speech). Actually, two separate recommendations. For fans of the musical, of which I probably made clear I am not familiar with, by all means, go out and see this. You’ll probably like it. For people who have no clue who any of the characters mentioned in the plot above, and are hopelessly confused by this review… well, I think Lincoln’s still playing. 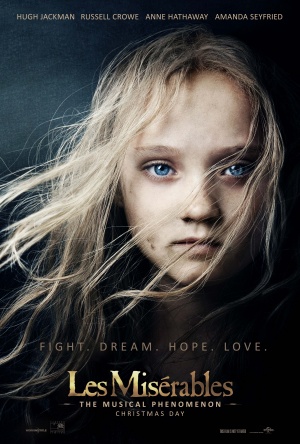