“For a little over half of the runtime, this really is the equivalent of watching a film about Batman and a film about Superman haphazardly interspersed with one another.”

END_OF_DOCUMENT_TOKEN_TO_BE_REPLACED

“This is a shiny and admittedly calculated-looking project. But it’s also incredibly fun.”

END_OF_DOCUMENT_TOKEN_TO_BE_REPLACED

A dark, serious mood like some recent superhero movies hangs high over Man of Steel, which is the latest reboot of the Superman movies. Produced by Christopher Nolan, who directed The Dark Knight trilogy, directed by Zack Snyder, who’s done comic book movies before, starring a talented cast, and with dazzling effects, everything combines here to create an immensely entertaining film.

This is one of those origin stories, as if there is still someone who doesn’t know about Superman. Oh well. At least it doesn’t take up too much of our time. Of course it starts on Krypton, the imminent destruction of the planet, and the blasting into space of young Kal-El/Superman, by his father Jor-El (RUSSELL CROWE), due to the havoc is being wreaked by General Zod (MICHAEL SHANNON).

Man of Steel proceeds to jump ahead three decades on Earth, where  Kal-El, now known as Clark Kent and played as an adult by Henry Cavill, is beginning to piece together his history. Finding the wreckage of a crashed spaceship encased within Arctic ice, he manages to speak with a ghost (or something) of his father. In the process, he runs into a reporter, Lois Lane (AMY ADAMS) who is covering the story of a giant spaceship in ice, however, after Clark/Superman uses superpowers to alleviate an injury that Lois receives, she begins to write about this mysterious man. However, her editor (LAURENCE FISHBURNE) at The Daily Planet refuses to publish it, so she leaks it to another source.

Suddenly, the army of General Zod invades Earth, threatening destruction if anyone who willingly knows of Clark’s true identity does not turn him over in 24 hours. This puts a few people on the spot, such as Lois and Clark’s earthly mother (DIANE LANE) (Clark’s father on Earth, Jonathan Kent (KEVIN COSTNER) died over a decade prior — 1997, to be exact).

This takes out about half of the 148 minute movie. After a brief period of transition into battle, the remainder (maybe last third, I’d guess) of the movie is devoted to a mind-numbingly loud fight between Superman and the minions of General Zod. Skyscrapers crumble to the ground, gravity is messed with, there are explosions to spare… and it’s really entertaining to watch. I use the term “mind-numbing”, but it’s not really a bad thing. While the fight does seem a little long at times, it’s still admirably executed, and I felt like I got my money’s worth when exiting the theater.

One of the major reasons Henry Cavill was probably cast is because he looks like a superhero – rugged and tall, just an overall heroic demeanor. He works in the part. Supporting roles, filled by the likes of Crowe, Adams, Fishburne, Costner, Lane, Christopher Meloni and Richard Schiff add other recognizable people to the game. There really isn’t an unsatisfactory performance to be had. Shannon’s Zod is perfectly over the top.

Visually, the third act of the movie – as I said before, composed nearly entirely of the climactic fight, is made up of a lot quick cuts, the status quo for the modern action movie. And that’s just the problem. During this event, there are times where it feels like just another action movie. Mind you, these lapses are thankfully never lengthy or terribly memorable, but it hurts the entire overview of the movie. Another problem is the way the story is told. Instead of progressing gradually through the growth of our hero on Earth, we are presented his history in a handful of flashbacks, which have the tendency to remove the viewer from the growing plot. Thinking about the creative team, as I have not seen a Snyder film before, I can’t comment on any type of consistency between works, but Nolan’s impact is clear from the start. The epic-style soundtrack is written by Hans Zimmer, a frequent collaborator of Nolan’s, and the screenplay is written by David S. Goyer, who wrote Batman Begins. (Nolan also co-wrote the story with Goyer).

I’ll admit I wasn’t the biggest fan of Richard Donner’s 1978 Superman, but it must be said that it is very important in the molding of the modern superhero movie (and I don’t believe anyone will beat Christopher Reeve at being Superman). I had a more immediately enjoyable time watching Man of Steel, but its significance will most likely be much less effective. However, this movie is well made and exciting. I have no problems recommending Man of Steel to anyone who’s a fan of contemporary (21st century) superhero movies. I saw this in 2D, as usual, and I ask you do the same. Rarely anything can be improved with tinted glasses over a bright action movie. 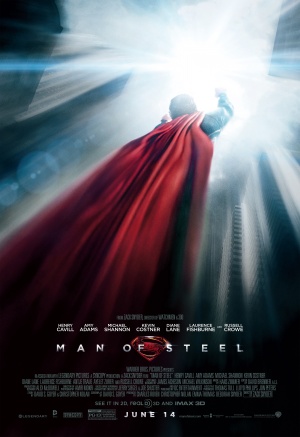