Catching up with two more reviews of movies that I missed from the first half of the year, here are my thoughts on Autumn de Wilde’s Emma. and Leigh Whannell’s The Invisible Man. 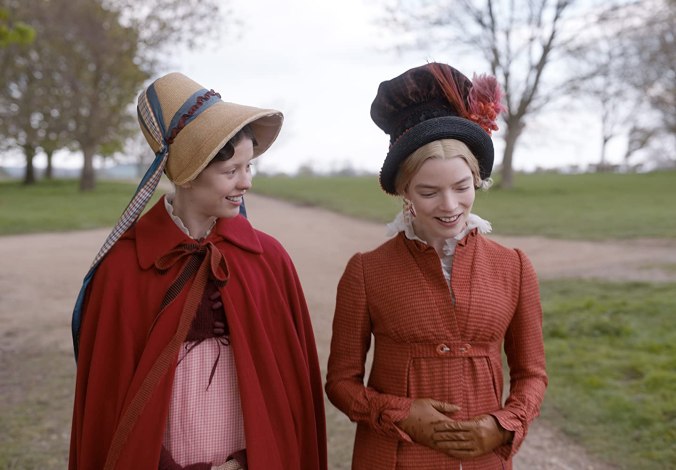 Breezily entertaining and meticulously detailed in its execution, Autumn de Wilde’s Emma (technically Emma.) is a confidently mounted adaptation of the Jane Austen novel, anchored by a confident cast led by Anya Taylor-Joy in the title role. The film’s production design is splendid, with Christopher Blauvelt’s bright cinematography highlighting the grand interiors of the film’s upper-class settings, and characters and rooms alike are dressed in appealing pastels. From moment to moment, we are invested in the proceedings, as the whole thing is just so well-appointed. Although Eleanor Catton’s script may not always adhere to the precise balance of its best moments – in between the inherent humor and human exploration to the story, or living right between the source text and the desire to create something new – the film is always guided sharply by its strengths, as de Wilde and company play into them the best they can. In retelling this story of a young and wealthy would-be matchmaker in 1810s England, in which she and those around her are beset in various ways by her blissfully ignorant overconfidence, Emma operates with a sturdy supply of energy and charisma. The movie operates on all cylinders, but never does so with the intent of showing off: it’s particularly accomplished in that respect, and at it’s best, it has an effortless wit and grace that allows the story’s episodic structure to unfold without feeling jarring.

As De Wilde directs the proceedings with the brisk energy of a filmmaker telling a well-known story with confidence (even if not much in the way of innovation), the film seeks to find the sweet spot between all of the narrative and stylistic considerations that go into creating this world; there’s something to be said about the movie’s ability to develop Emma’s character traits and cringe-inducing bad choices within a context of such heightened reality in terms of the film’s vibrant visual look. In a way, it serves to emphasize the extreme thoughts and feelings of the character, as she blasts through her extended social circle and wreaks peculiar havoc. The movie’s energetic and matter-of-fact navigation of the messy ties between Emma and the other denizens of her community – and the even messier issues she exacerbates between her and Harriet (Mia Goth), Mr. Elton (Josh O’Connor), and Mr. Knightley (Johnny Flynn) – speak to the text’s durability in taking us through lengthy lists of supporting characters, and the film’s gameness in seeking to adapt this intentionally knotty text with such a promptly paced approach. It’s a thoroughly enjoyable ride, one which provides many impressive accomplishments through its leaning into the story’s frenetic energy and projecting it with thoughtful spirit. Rating: three stars out of four. 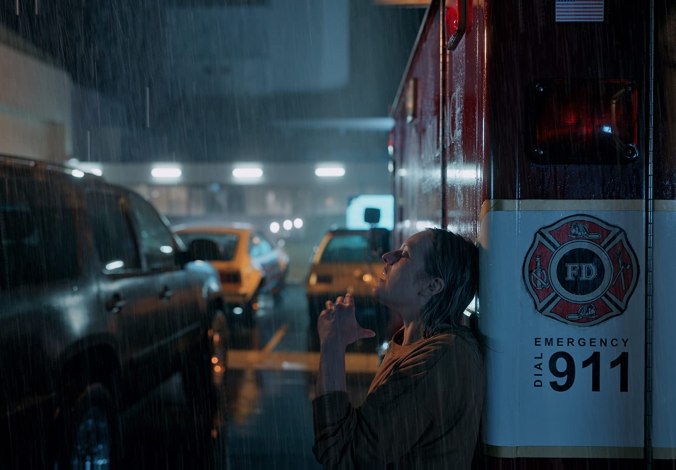 The bravura opening sequence of Leigh Whannell’s The Invisible Man sees Cecilia (Elisabeth Moss) navigating an escape from the twisting, turning mansion of her abusive partner, tech mogul Adrian (Oliver Jackson-Cohen). The compound is somehow simultaneously paneled by floor-to-ceiling glass and deeply labyrinthine, and Cecilia only just manages to escape without being caught on site. This scene is expertly shot, cut, and performed, and critically places us within the individual perspective of the main character, which the film will remain with throughout. Days after taking refuge in the home of her friend, police detective James (Aldis Hodge), and his teenage daughter, Sydney (Storm Reid), Cecilia learns that Adrian has apparently died by suicide. But almost immediately after, a series of strange occurrences begin taking place, leading Cecilia to believe that she is not alone. Objects get stuck to seemingly nothing at all, fires mysteriously start, and depressions form in the seats of ostensibly empty chairs; it only gets more sinister from then on. Cecilia then concludes that Adrian has faked his death, and using the experimental optics technology he had pioneered, mastered the ability to become invisible, and is continuing his pattern of psychological and physical abuse. As he sabotages her life, those around her – James, Sydney, and her sister, Emily (Harriet Dyer) – believe that she has become deeply unstable, as erratic actions take place every time she is around (atop her insistence that she is being stalked by a man they all believe to be dead) and Cecilia becomes increasingly isolated and distrusted as things continue to worsen.

From this, we can see that the substance of The Invisible Man’s setup is, most clearly, an examination of the lasting effects of abusive relationships on survivors, and how the trauma lingers long after the relationship itself might have ended. Whannell expertly builds the shattered world that Cecilia inhabits, and Moss delivers a roundly brilliant performance, both able to develop the interior existence of the character at the film’s highly internalized start and retain it as Whannell’s approach veers toward the horror-tinged rhythms of its third act. The transition between the two has come under some criticism as something of a dropoff in quality, but I’d posit that the script is largely efficient in the buildup as Adrian’s actions turn increasingly big and more existentially shocking. Certainly, the need to create the uncertain and perpetually dangerous environment of the film leads to a well-considered mood of rapidly building dread; Stefan Duscio’s cinematography bathes much in shadowy greys, and emphasizes the notion that there is always some other force we’re not seeing. When the film does disappoint, it’s on a departure from those terms: a finale that seems to wrap things up a bit too quickly or abruptly ends things on something of a confusing note. But still, The Invisible Man is, for the most part, a suspenseful and substantive thriller, moving with great technical efficiency and skill, and telling its story with an eye towards deeply critical and relevant core themes. Rating: three stars out of four.