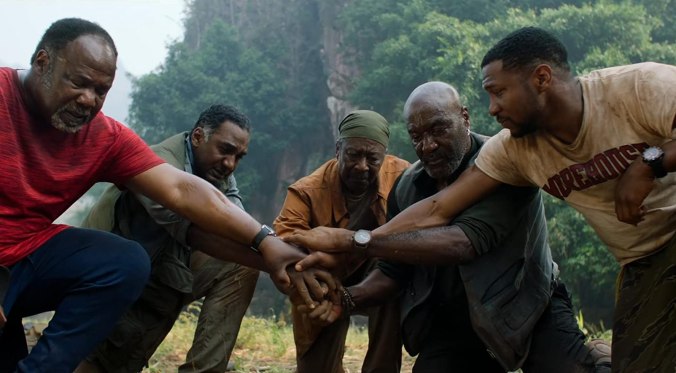 “It’s hard not to feel deeply compelled by the journey that is depicted in the plot, and more broadly, what the journey represents in a larger sense.”

To discuss a Spike Lee film is to discuss a filmmaker’s choices on a more direct, individual, and acute level than one might for another director; his movies are filled to the brim with varying approaches and pursuits, and varying planes on which his messages are conveyed. He operates on multiple levels simultaneously and wants you to take it all in at once, and even the choices he makes which feel excessive or perhaps don’t work as well as other ones are still choices you can’t shake, and are intrigued by, even if you don’t particularly like them. His newest film, Da 5 Bloods, is a two-and-a-half-hour, particularly freeform exercise. It comments upon the near-completely ignored presence of African-American soldiers in the Vietnam War (nearly a third of U.S. soldiers in the conflict were Black, though you wouldn’t know it from pop cultural perceptions of the war) through the lens of bracing war drama. It follows four Black veterans – Eddie (Norm Lewis), Melvin (Isiah Whitlock Jr.), Otis (Clarke Peters), and de facto team leader Paul (Delroy Lindo) – as they return to Vietnam in the present day, alongside Paul’s son David (Jonathan Majors) under the mission to finally recover the remains of their squad leader Norman (Chadwick Boseman), who was killed in an ambush, and retrieve a secret stash of military-owned gold which was lost in the same skirmish.

It starts as a reunion, albeit one with a somber and risky mission. But as time goes on, and the retrieval is underway, deep in an isolated jungle, it becomes clear that particularly dangerous complications will arise – from everything from long-hidden landmines dotted along the jungle to the ulterior motives of the wealthy businessman (Jean Reno) enlisted to oversee the gold operation. Everything is here, further added to as Lee cuts between the high stakes of the present and the war flashbacks that the men experience; though, as the dangers of the past seem not dissimilar to the dangers of the present, such flashbacks become infrequent. Though nominally an ensemble piece, all the characters are well-developed, even as the film focuses more on Paul. And though every performance is good here, it must be said that Lindo, in a spectacularly driven turn, brilliantly portrays a man who feels deeply rattled by the twists and turns he has endured from his life, and everything from his unsettling political views (Paul, much to the chagrin of his friends, is a diehard Trump supporter) to his relationship with his son, is portrayed as another extension. It’s the kind of complicated and messy approach that Lee imbues to the whole venture: and while his intentional lack of traditional cohesion both helps the film feel as immediate and vibrant as it does, and is the source of its major shortcomings in plotting and pacing, there’s no question that we’re watching a filmmaker striving and mostly able to fully convey a bold and enveloping vision, and that in and of itself is something to behold.

It embodies that ideal through every sense – through the propulsive performances, through Terence Blanchard’s urgent score, through Newton Thomas Sigel’s sweeping cinematography – and thus, to watch Da 5 Bloods is to know and experience its world as one of constant and near-omnidirectional motion. It’s hard not to feel deeply compelled by the journey that is depicted in the plot, and more broadly, what the journey represents in a larger sense. The plot is wrapped within speeches from civil rights leaders in the 1960s speaking out against the Vietnam War, further bringing home a core message which pushes back against American culture’s deep denial to acknowledge the sacrifice of the Black soldiers therein; it expresses the pain of enduring the horrors of war, only to return back home to a systemic racism of American society. The film tells that story and conveys that message with deep and uncompromising energy. It is a long movie, and its length is knowingly used to explore every idea through every possible lens; switching between aspect ratios and employing monologues, dialogue-free action sequences, and music with kaleidoscopic frenzy. In this bold and expressive effort, there is, yes, sometimes the feeling that there might be too much here for us as viewers to fully latch onto everything that’s happening. But through it all, Lee never lets us lose sight of the key points here, through the characters he creates and the direction that he employs.

One thought on “Da 5 Bloods — Review”