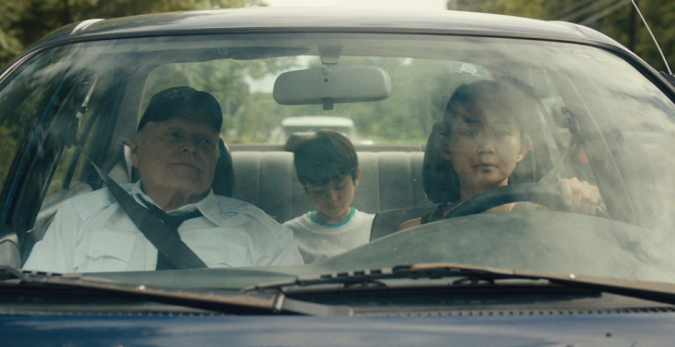 “A subtle but assertive work of great, gentle warmth.”

The great thing about Andrew Ahn’s Driveways is how it seeks to find space in the silence between words, between actions, between thoughts; that it doesn’t find itself rushing to fill every second out, and how it takes its time in building its world and revealing who its characters are. Hannah Bos and Paul Thureen’s script disregards effusive plotting or setpieces, sometimes leaving spaces that another filmmaker wouldn’t process. With Ahn, it’s a film of slow and careful examination, but it’s almost always deeply interesting and involved. It follows Cody (Lucas Jaye), an eight-year-old boy, and his mother, Kathy (Hong Chau), as they move into the home of his elusive, recently deceased aunt, to settle her estate. The house is on the outskirts of a rural town, and the reserved Cody feels alienated. However, he soon forms a bond with Del (Brian Dennehy), an elderly widower who lives next door. Though they are far apart in many other ways, they connect over the need to connect. It’s not a deliberate point on the film’s part to track their impromptu friendship on some specific progression: in fact, there’s little here that Ahn does track as a deliberate series of plot points. He excels in examining each moment, as we slowly peer into the lives of Cody, Kathy, and Del – individually and then collectively – learning more about them and how they get to know each other. But through this, thanks to capable direction and accomplished performances, a fuller portrait emerges from these small pieces, as the film becomes a subtle but assertive work of great, gentle warmth.

There is a loneliness within these characters, a desire to be seen that they can’t accomplish with others in the way that they want to. Through a sincere approach that genuinely understands how to explore these feelings – with the same level of empathy that it wishes to convey to the viewer – Driveways conveys these emotions without ever feeling saccharine. Its message about kindness and caring, and about those ideas in ways that avoid the canned, obligatory cliches that other movies that seek to be about those things are. Simply put, it comes down to Ahn’s sturdy style and a great cast of actors who operate alongside each other well. Jaye gives a well-considered performance as Cody, and Chau as Kathy – who must navigate a rocky time and difficult relationship with a sister she realizes she didn’t know as well as she did as she navigates what was left behind – may not often be in the forefront of the film, but excels throughout. But Dennehy, who died three weeks before the movie’s U.S. release, is the actor who has received the most notice for his performance here, and for very good reason. In one of his final performances, he indicates a history for Del far beyond what we might know for sure about the character – be it alone, with his new neighbors, or with fellow veterans playing bingo at the local VFW – and does so in a way that’s conducive to what is on the page, letting the viewer understand more, or at least understand with a rich appreciation. With Jaye’s Cody, there is a tender, unspoken respect that is inherent and moving.

It’s the strength of these performances which helps Driveways soar as high as it does. Even when the script’s slightness seems like it’s leaving too many unturned stones, or arrives at an ending which can play as thin or abrupt on its own, Ahn’s direction and the actors’ thoughtful work keep the movie from feeling too slight for its own good. This is not a film about looking for clear answers to the characters’ problems, or envisioning that there’s some sole, pristine way for everyone to come together; it’s about change and struggle, confronting the future with against the difficulties of the past. And yet, the joy which comes from this is in the simply pitched but smartly mounted sense of understanding that drives the film from its core; it lives its ethos without commodifying or cheapening it. It drifts from occasion to occasion with the smooth golden glow of a memory, and within them, carries the improvised but familiar rhythms of life as it’s lived in the moment. Ahn and company know how to tell this story and explore its strengths and depths, striving to establish small moments which quietly carry big ideas and meaning.

One thought on “Driveways — Review”