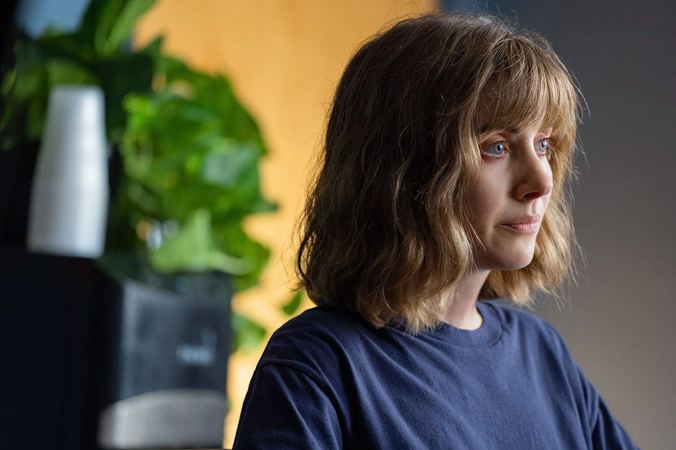 Alison Brie in a scene from Jeff Baena’s Horse Girl

“It isn’t able make overall impressions or solid points, and instead feels like a collection of ideas without any fully realized goals behind them.”

The eventual problem that Jeff Baena’s Horse Girl runs into is that, in an effort to examine its main character and its subject matter through a deft, disorienting, and abstract approach, it isn’t able make overall impressions or solid points, and instead feels like a collection of ideas without any fully realized goals behind them. Though Baena’s direction is stylish, and Alison Brie is commendable in the lead role, their script often operates at a frustrating distance, coming close to connecting its concepts and building to the kind of points that it  wants to make, but never quite does. The story lives in a deliberate set of ambiguities, depicting the struggles of Sarah (Brie), a woman whose otherwise routine life has been interrupted by increasingly bizarre and intense dreams, frequent lapses in memory, and episodes of sleepwalking. This sudden change has thrown her entire life into chaos and damaged her relationships, as her visions lead her to think that she has been abducted by aliens. She has a history of mental illness in her family, and the film makes some broad efforts to explore how mental health is addressed and viewed in American society, but it spends too much time living in the unknown spaces of its character study. Instead, it’s surprisingly fixated on the question of whether Sarah has actually experienced what she believes, and unable to consider how to deal with this conflict, simply wanders around it for a while.

In other words, the film angles itself as something of a mystery, but what is actually meant to be unclear and why, and if there will be any resolution to it, seem like secondary matters to Baena. Sarah is an interestingly envisioned character, and there’s something to be said about how a first-act buildup of her interests and hobbies – from her favorite TV show (a sci-fi mystery series, appropriately enough) to a lifelong passion for horses (hence the title) – form the basis of the disturbing, surreal episodes that she begins experiencing later, solidifying how she can no longer experience comfort in the familiar, because no such stability exists. That’s the kind of disquieting concept that Horse Girl excels in, but it so often avoids grappling with any of its ideas in depth. The film is at its best simply being with Sarah, in unspooling her backstory and depicting everything getting worse for her without the resources and access to help she needs. But somewhere along that line – perhaps, quite simply, at the stage where it becomes less about the character’s conflicts and more about an inclination towards slews of surreal imagery – the ball is quite spectacularly dropped, and the movie hardly feels like it’s moving anywhere at all. Even in the third act, as Sarah’s condition deteriorates to the point of hospitalization and the movie could return to its most incisive points about mental healthcare, the film still fails to refocus into anything salient.

This particular issue builds to an ending that is all ambiguity and nothing else, and we’re left feeling that all not that much was meaningfully addressed. It’s incredibly disappointing that Horse Girl seems to lose the thread in such a way, because it’s often apparent that there’s the possibility of something more. Brie’s performance demonstrates this; she has a sharp command of the character and an energy that she can channel into each of Sarah’s turns and developments. From there, she forms a portrayal of a character that remains at least engaging, even when the film around her seems somehow less interested. It’s that divide between the talent apparent in the execution of the movie, and the structural weaknesses of the script that everyone is working from, that make this such a befuddling and dismaying experience. The movie seems confident in its capacity or ability to comment, both in direct and indirect ways, on its central musings about the treatment of mental illness, but misses said opportunities by focusing its energy in the wrong places. We end up seeing only part of the full picture, with the movie’s predilection to obscure its own realities doing it a considerable disservice to its own strongest observations.