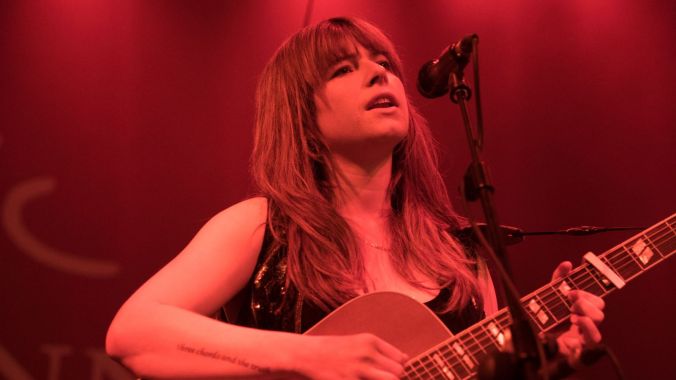 Jessie Buckley in a scene from Tom Harper’s Wild Rose

“More grounded and perceptive than many other narratives of its ilk.”

Telling a familiar kind of story with exceeding strength and a smart sense of self-examination, Tom Harper’s Wild Rose gets things right. At first glance, it might seem like any other story of a hardscrabble, aspiring artist fighting to realize their goal, but it’s much more grounded and thoughtful about its main character’s complexities, her motivations, and her personal growth. Featuring a brilliantly dynamic and indelible performance from Jessie Buckley in the lead role, the film follows Rosie-Lynn, a young woman from Glasgow who has just been released from a year-long prison sentence. A lifelong country music fan, she’s played at a few small, local venues, but she dreams of moving to Nashville and dedicating her life to her craft full time. However, her one-track aspirations ignore her situation: she doesn’t really have a safety net to speak of, and she also has two young children, who, since her incarceration, have been under the care of her own mother (Julie Walters), and she seems to have taken that arrangement for granted after her release. Finding work as a housekeeper for the wealthy Susannah (Sophie Okonedo), the two bond, though Rosie-Lynn is both forthcoming with her and evasive; she shares her music dreams, but nothing about her family or her past. This unhealthy imbalance between personal passions and the actual nature of reality is particularly tough for Rosie-Lynn to work through, and as with all such narratives, will take some difficult episodes and encounters to find a workable future.

It’s the push-pull – the messy stew of aspiration and finding one’s footing in a world they can live in – that drives Wild Rose’s conflict, making it more grounded and perceptive than many other narratives of its ilk. There’s no clear-cut or preordained structure to the narrative, and while sometimes that can leave the script struggling to form a specific order or feel, it’s hardly detrimental as a whole; the roundly fantastic cast are more than capable with whatever directions the conflict travels. To follow one’s dreams does not mean to do it at the expense of all else, and running off to a new location does not negate the baggage one has left behind. It’s a simple message, but Harper directs the cast through a solid and generally quite capable route to telling it. But again, particular mention must be given to Buckley, who constructs a fascinating portrait of Rosie-Lynn that feels palpable and so deeply accomplished: she allows the character to feel at once vulnerable and driven. She does not allow the character’s personal faults or lopsided priorities to take a backseat, as the acknowledgement of major flaws is intrinsic to the character’s complicated arc. And working alongside other actors, frequently Walters or Okonedo, she can communicate the many sides of Rosie-Lynn in a myriad of situations, be it a confrontation with the people and the parental responsibilities she would rather forget, or her attempts to construct a world where she actually can.

Through this, everything intertwines and evolves, to a point where it might seem like a properly realized ending is hard to envision. However, Wild Rose, while taking care to emphasize its realist roots, still manages to deliver us a finale that’s as sweeping and moving as anything else you’re likely to see this year. How does it accomplish this? To understand why is to examine why the entire movie works as well as it does. It earns it because it has been forthright, and stays with us where other interpretations of such stories might fail and root out for something more generic and abrupt. This is a narrative about finding success that is not traditionally delineated, defined, or mythologized. And thus, it’s so satisfying to see that the film understands that as well, with a wise vision in seeing everything through with great internal honesty and integrity. Rosie-Lynn’s idealistic visions clash with the gravity of her real obligations to her children, and it’s clear that she’ll have to forge a path that takes more than her own unfiltered fantasies into consideration. But the movie doesn’t lecture her, or us, on these matters. Instead, it capably pulls us through what’s at hand, and even when the script mires a bit too long or short here and there, it builds to that wonderful ending, all the more effective because of it, and all the more impactful to experience and embrace.