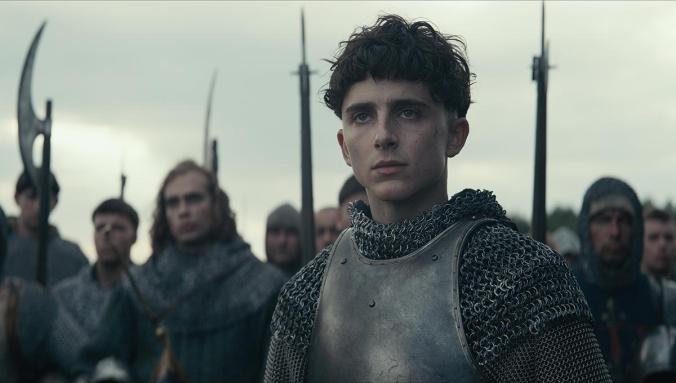 Timothée Chalamet in a scene from David Michôd’s The King

“It’s a technically impeccable work through and through, but it suffers when it often feels detached, or otherwise overstuffed and underprepared.”

We look at David Michôd’s The King with a particular set of references and expectations. It wants us to make them, angling itself as a big, windswept historical piece. The film takes its plot from three plays of Shakespeare’s Henriad, and culminates with a round of big battle scenes. It’s a technically impeccable work through and through, but it suffers when it often feels detached, or otherwise overstuffed and underprepared. In examining the ascension and rule of Henry V (Timothée Chalamet), or Hal – the young English monarch who overcomes significant levels of skepticism to rise to glory in war against the French in the early fifteenth century – we’re given something of a whirlwind approach, in which character development, political machinations, and military campaigns are whipped into such a discordant frenzy that none are really ever given their due. It’s clear that the script, by Michôd and Joel Edgerton, wants to blend its various aims into the classical epic’s grand balance, but what’s missing is a unified sense of scope and purpose that keeps our interest and maintains a structural integrity. The movie muddles along, and though never unpleasant, it just exists on the screen for a lot of the time, and you can take or leave it.

It’s a nice feather in a lot of people’s caps, and demonstrates further Chalamet’s ability to assume any wide number of roles across disparate genres, but The King falters under the bigger problems of differentiating and defining itself. As is, scenes and performances might stand out, but they too often feel like detached pieces, which play in their own right but never amount to everything in the collective. Our interest piques from time to time, such as in the fascinating dynamic between Hal and the eccentric, condescending French Dauphin (Robert Pattinson), but just about every subplot or element is given relatively little screen time in totality, and their existence doesn’t really affect the others. (Similarly, the early conflict of seeing Hal prepare to assume and adjust into the role of king is dropped as soon he’s on the throne.) By brushing through narrative elements from three different works, there’s not a lot left to really work with. What are we really left with here? Michôd and company stay with us, up to a point, in terms of creating a world we can understand; on the side of technical achievements, Adam Arkapaw’s cinematography is suitably dirty and grimy to emphasize the film’s setting, though never to the point of calling attention to itself. But in that world, we’re only treated to snippets of a greater whole that doesn’t really reveal itself in a palpable way.

To put it in other words, we can watch The King, but learn relatively little about the king. The movie leads us through his journey without ever stopping to truly observe or explore. It divides itself into segments and works on them busily, compartmentalizing at great cost. Certainly, one would assume that the lessons of the current media era we live in would demonstrate that feature length productions are nowhere near the only way to explore this story with the scale desired, and if there were too many logistic constraints to a miniseries-length version of this project, then it’s still puzzling to consider what can be made of adapting three plays in a larger cycle into one movie that, without credits, runs barely two hours. Michôd has repeatedly demonstrated himself a capable director, and his cast and crew are up to the challenge of creating top-notch realizations of the script, but it is that screenplay that comes up as the weakest link. Relatively quickly, the movie gets stuck in a rut of shallow characterization that its achievements in craft can’t themselves work through. It fades into the background, becoming an only sporadically creative and engaging film that ultimately sees all but its most startlingly accomplished assets anonymously dissolve and blend into its overall middling tendencies. It plays so down the line that it can seldom imagine drifting outside of it, but does so just enough to make us wonder in frustration about what could have been.