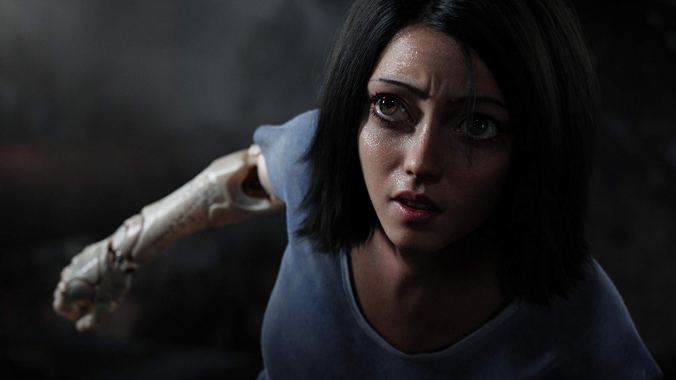 “A cheerfully mystifying experience, even if you’re not sure exactly how to quantify it while you’re watching it.”

The mere experience of looking at Robert Rodriguez’s Alita: Battle Angel, a gloriously garish sci-fi adventure, is something to feel giddy about. Yes, there’s a dozen movies’ worth of story stuffed into this two-hour event, as if there were always the distinct feeling that the film was almost out of time. And yet, though James Cameron and Laeta Kalogridis’s script is often stuffed to the point of feeling overstuffed, the wonderful rush that comes from the lived-in feel of the movie’s world, and the commendable visual look alongside it, holds throughout. Based on a long-running manga series, the proceedings take place in a run-down city in the 26th century, filled with the descendants of the survivors of the earth’s demise in a long-ago war. We follow Alita (Rosa Salazar), a badly injured cyborg who has been healed by scientist Dyson Ido (Christoph Waltz). Alita was once a soldier, and while she retains few memories of her past by the start of her life under Ido’s watch, she still has an inclination towards combat. The most convenient way for her to exert that skill now is through motorball, a violent sport best described as gladiator matches taking place on a roller rink. And while she does find her way around the game, more pressing issues push Alita to take up a career as a bounty hunter and navigate the melee of humans and robots alike that control the city below and the dictatorial whims of Zalem, a floating city above them that houses the ruling class and seems to harbor more secrets about the present situation at every turn.

Along the way, Alita falls in love with a good-hearted thief named Hugo (Keean Johnson), crosses paths with competing bounty hunter cyborg Zapan (Ed Skrein), and draws the ire of Vector (Mahershala Ali), a powerful businessman who seemingly has ties to every industry and sector of society. Alita: Battle Angel simply can’t wrap up every thread in a timely manner, but Rodriguez does an admirable job of keeping our interest, if not our understanding, through the near-unnavigable web of plotting that Cameron and Kalogridis provide us with. A lot of his success is dependent on a solidly based vision that he and his company provide. It all starts with Alita, who is depicted as having large eyes that take up about a quarter of her face; even in motion capture, obscured by a complicated mass of special effects, Salazar is still able to develop the character with an innate sense of duty alongside a search for a destiny and identity, ensuring that we understand the magnetic drive of our protagonist from the very start. The supporting cast risks getting lost in the constant rotation of ideas and storylines, but do a largely admirable job in holding their own.

They’re helped by a certain believability to the setting, which has a consistency to it that is one of the few things that never runs the risk of getting lost. Though the film’s universe is enormous, the culture is communicated and the feel of the environment conveyed. Everything feels old, so much so that the bursts of hyper-futuristic technology that dot the scenery feel nearly ironic for a city where every soul carries varying levels of weariness and resignation (except for Alita). You can’t understand everything that’s happening onscreen, but you can understand why people might be acting the way they are, and there’s an incredible value to that. When the action starts up, it’s entertaining and inventive – there’s a setpiece in a bar filled with battling bounty hunters that’s truly something to behold – but not in a way that feels unresponsive to the thoroughly messy surroundings. Instead, they feed into a more complicated mythology, where every individual, technology, and reference has an apparent history. Alita: Battle Angel is a delirious blast of genre excess in its best moments, but even in its worst, is still something of a very specific and rare kind of misfire: one that is a billion things (sometimes at once), but certainly never boring or rote, and one in which we always carry the hope that the ship will be righted soon, and carry onto whatever miraculous ending is awaiting.

Disappointingly, the ending is not all that miraculous – it’s a mere sequel hook, again enforcing the theory that the weak link here is the writing, and the best things that happen in the movie are those which are extrapolated out from Rodriguez’s worldbuilding, and not the moment-to-moment story structuring. In totality, these efforts build to create a cheerfully mystifying experience, even if you’re not sure exactly how to quantify it while you’re watching it. As soon as it was over, I was filled with a strong urge to rewatch it as soon as possible, convinced that in the stacked noise of what I just saw, I must have missed something or some unifying element that would have solved the script’s problems and made it the uniformly enveloping experience of its best moments. I know I’m probably wrong, and such an easy solution doesn’t exist in the movie. Maybe the screenplay is just miscalibrated, and it does reduce the film as a whole. But it goes a long way to conveying the silly heights and fascinating foundations of Alita: Battle Angel that I was so compelled to revisit its unmistakable universe so soon, in search of some hidden factor that would let it all make sense.