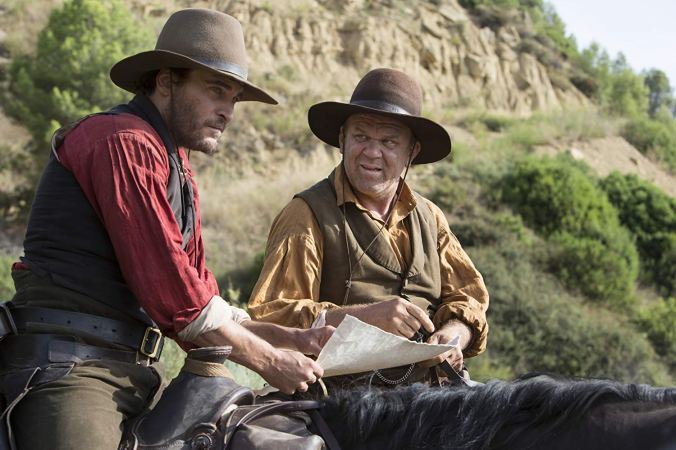 Joaquin Phoenix and John C. Reilly in a scene from Jacques Audiard’s The Sisters Brothers

There’s an intentional uneasiness to Jacques Audiard’s The Sisters Brothers. As a careful interpretation of the Western genre as a whole, the film takes great care to depict its characters, settings, and scenarios with all the unsettled fervor that’s inherent to the cultural mythology it’s based upon: after all, when we think of a Western story, we think of men riding across into landscapes they did not know, often involved in some kind of breaking of the law or escape from lawbreakers. Audiard, working from a script by him and Thomas Bidegain, which is based on a novel by Patrick deWitt, establishes the precarious nature of its character relationships from the get-go. We learn that the idiosyncratically named title characters – brothers Eli and Charlie Sisters (John C. Reilly and Joaquin Phoenix, respectively) – are gunmen the 1850s Old West whose latest job, at the behest of a strange businessman, requires them to kill another enigmatic figure: Hermann Kermit Warm (Riz Ahmed), who has been making wild claims of inventing a formula that would make make finding gold much easier, and if true, would explain why the Sisters’s contractor wants the formula for his own and its inventor too dead to complain. The exact logistics of how to find and eliminate Warm are convoluted at best, which means that a third man, investigator John Morris (Jake Gyllenhaal), has also been hired to assist the Sisters in their job. But the promises of a healthy payday and the associated pressure build quickly – and when they do find Warm, they find that he also has some compelling  alternative promises for them – leading to strange new allegiances and possible betrayals at every turn.

The plotting here is purposefully complicated in its own way, but it never gets in the way of the film’s overall rhythm, which is parts silly and contemplative, thanks to Audiard’s mastery of tone and character development and a capable cast to bring it to life. In the same breath, The Sisters Brothers excels at physical gags (such as a running joke around the characters discovering what a toothbrush is and cautiously learning how to use it) and more reflective moments where the uncertainty of the mission brings us to deeper implications on the tropes of the Western that the film wisely uses and evaluates. Motivations are built around promises, from the lucrative payment for killing Warm, to Warm’s own mysterious claims of success he could bestow upon others. In much the same way, Audiard, a French director making his American filmmaking debut, gradually deconstructs the promises we associate with this most American genre. We may associate the classic Western with stoic characters on singular quests, but they don’t reflect the nuances that are inherent within the material, or how we assign cultural capital to these ideas perform a simplified imagining of a far more complex concept. Audiard does this not to criticize, but to understand, and perhaps help us understand at the same time. Through his humor and his scripting, he positions the Sisters brothers as characters whose bumbling and opposing personalities make them great foils for each other, or just about anyone else around.

Audiard’s approach to the movie’s wide tonal range is decidedly tangent-based; while this can lead to an occasionally scattershot script as the progression of events seems to occur without rhyme or reason, his actors are so strongly suited to every development or twist that they carry us through the rough patches. Reilly and Phoenix shine here, leading a deft supporting cast with a great understanding of the Sisters’s peculiar dynamics in both little moments and bigger arcs alike. Though we may not have a great feeling of where this is all building to as the narrative’s rambling twists sprawl on, The Sisters Brothers’s single greatest achievement might be what it can accomplish in creating vivid character portraits of individuals who never really figure out what they’re doing. They shoot and stumble their way from town to town, with new dangers or surprises awaiting them at every turn, and there’s the constant feeling that there’s clearly no overriding plan: they do what they can, whenever they can, and much of the humor comes from the vast array of possibilities that come from there. It’s a smartly self-reflexive work. In each performance balanced between comedy and drama, in every breathtaking landscape shot from cinematographer Benoît Debie, and in every knowing genre observation or joke that Audiard communicates, the overriding intent of the film is never lost, and it’s so bravely mounted and unrepentantly its own that we can surely forgive some of the loose ends that might come about along the way.