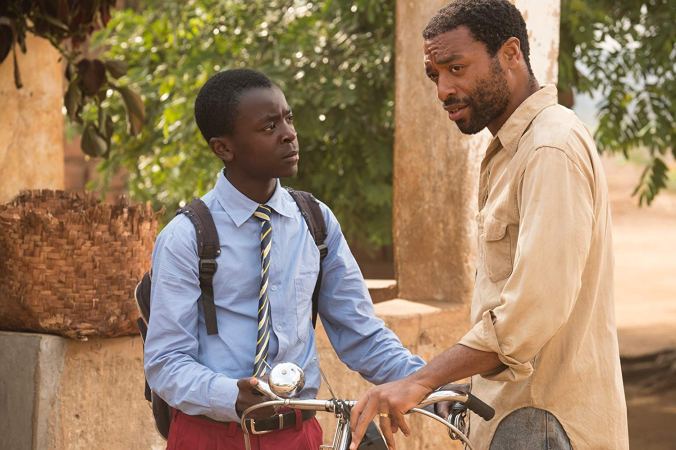 Maxwell Simba and Chiwetel Ejiofor in a scene from Ejiofor’s film, The Boy Who Harnessed the Wind

“A movie with a tonal earnestness that’s balanced with awareness of the complex reality on which it’s based.”

There’s this sense of evenness that Chiwetel Ejiofor brings to The Boy Who Harnessed the Wind. Though he wears many hats – directing, writing, and co-starring – his approach to the material is admirably open, allowing events to unfold with clear momentum, but without the overt fatalism that dooms so many biopics. In telling the story of William Kamkwamba (Maxwell Simba), a Malawian inventor who, as a teenager, built a windmill to harness wind power and retrieve water to assist with farming for his food shortage-struck village, the movie takes a refreshingly clear-eyed view to dramatizing real events. The script is well-mounted and naturalistic, allowing actors to live and breathe in their own space. They form organic connections to the maelstrom of internal and external conflicts that mark the difficulties their characters face, assisted by a script that avoids oversimplification for the sake of a general audience. Instead, its crowd-pleasing effect comes from the natural fascination of Kamkwamba’s story, assisted by a grounded lead performance, and sealed by Ejiofor’s firm sincerity as a filmmaker. This is a movie with a tonal earnestness that’s balanced with awareness of the complex reality on which it’s based. It’s a necessary combination, skillfully done.

The ultimate test in this respect is maintaining of the audience’s interest and the reconciliation of the knowledge that the outcome of the story is verifiable, accessible fact. Many films are too caught up in that struggle, and instead perform as if they’re forced to tell their particular stories, hitting each note with  predictable speed. Though The Boy Who Harnessed the Wind is largely devoid of stylistic flourish or particular thematic audacity, it’s an example of a movie that understands the balance between storytelling and dramatization of history in a way that’s more knowing than most of its genre counterparts. William’s hunger for education and its transition into his invention is given the proper emotional journey that it deserves. Ejiofor’s script navigates us through the surrounding context of the events, instead of leaning on writerly predetermination. The sketches of William’s family – consisting of his father, Trywell (Ejiofor); mother, Agnes (Aïssa Maïga); and sister, Annie (Lily Banda) – are sturdy depictions of people living in a state of existential uncertainty, as the food shortages, compiled with economic woes and the geopolitical instability of the era wreaking global and local havoc (the film is set in the early 2000s), serve to augment our understanding of William’s psyche, as opposed to being mere window dressing. Later conflict between him and his father over the abstract nature of his vision for building the windmill (contrasted with Trywell’s down-to-earth farming skills) is  rooted in universal tension for a family facing crisis on multiple levels, and both actors use it as emotional anchors during the film’s third act.

By then, we’ve realized that The Boy Who Harnessed the Wind is more than robust; it’s a nuanced drama that works with a keen sense of its assets and potential. Even if the uniform sameness of the film’s pacing renders a few too many developments flatter or more rhythmically monotonous than they should be, that doesn’t detract from its ability to use its vast array of talent in creating the celebration of ingenuity and ambition that it aims to be. Such buzzwords sound terribly predictable and overtrodden to say, of course, but perhaps that’s only because so many other movies that try this same route come up short, and, to put it simply, don’t have the understanding of their own filmmaking craft that Ejiofor’s production bears. And since so many other movies of similar aspiration are mediocre, it’s an accomplishment in and of itself to see the job done well. The movie doesn’t pretend that the windmill’s construction was ever a foregone conclusion, that William Kamkwamba’s achievements represented a permanent fix for the circumstances that mandated them in the first place, or that any one invention ever could. The difference is that it’s a movie smart enough to understand that it doesn’t need to condescend – to its subject matter or its viewers – to get its point across. From there, it’s freer to construct a portrait of a specific time and place, helping us understand how each thing leads to the next. It’s a setup both direct and uncluttered, and that makes all the difference.