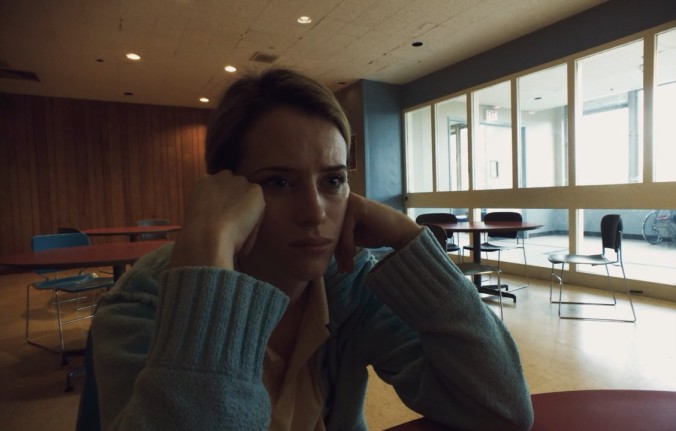 Claire Foy in a scene from Steven Soderbergh’s Unsane

“An allegory of society’s response to victims, in regard to how its main character struggles to gain any sense of real freedom.”

Much has been made about how Steven Soderbergh’s Unsane was shot on an iPhone, making him arguably the most high profile filmmaker yet to experiment with filming an entire feature on a cellphone. He embraces the camera’s limited capabilities; its inability to successfully imitate the warm textures of film stock, its tendency to make bad lighting look even harsher, and its inconsistent saturation of colors. Images are frequently washed-out and distorted. Such an approach creates the impression of a movie that’s deceptively ad hoc, and through it Soderbergh crafts a much more complex investigation into antagonistic forces pushing against personal autonomy.

Notions of overpowering confinement take many forms here, but they all affect Sawyer (Claire Foy), a young woman who was recently a victim of stalking. Unsafe in her home, and unwilling to submit to the relentless, soul-sucking safeguarding that would exacerbate her paranoia even further, she moves hundreds of miles away. Yet the trauma of her experiences still haunts her, and she seeks out therapy for stalking survivors. She encounters an innocuous ad for a research facility that seems to match her needs, but after speaking with a specialist and signing a lengthy legal form, she finds herself forbidden from leaving the building. It turns out that she’s in a mental hospital, and the paper she signed was a patient admittance form.

A fellow patient (Jay Pharoah) tells Sawyer that the hospital is being operated an insurance scam, admitting sane people to meet a quota. The less commotion she makes, the sooner she’ll be discharged. But that proves impossible for Sawyer, who must engage her traumas directly when she realizes that her stalker has joined the hospital staff under a false identity, posing as an orderly (Joshua Leonard). None of the doctors and nurses believe her, and calls to the police go unheeded as the insane ramblings of the mentally ill. Through this, Sawyer begins to actively question her sanity as attempts at escape open greater dangers, and the constant threat that the man who nearly destroyed her life has returned.

Foy is magnificent with this material, meeting the script’s most vicious turns with a raw mixture of fear and anger that matches Soderbergh’s visual approach. Sawyer is the subject of dehumanizing surveillance and objectification, both at the hands of her stalker and the facility that has imprisoned her. Unsane works as an allegory of society’s response to victims, in regard to how its main character struggles to gain any sense of real freedom. Both systems and individuals work to keep her helpless, and when she raises an objection to her circumstances out of an imminent concern for her own safety, they dismiss her claims as hysterical.

That’s what drives the fear behind the film, as its claustrophobic style (with a nearly full-frame aspect ratio) carries the plot progression, as well as the deeper inferences brought by Sawyer’s history. Even as Unsane builds unconvincingly through its third act, to a finale that seems clichéd and safe compared to the more ambitious subtext of what came before, Soderbergh’s direction is as confident and exploratory as ever. He uses his talented cast and the aforementioned thematic undercurrent to overcome the weaknesses of Jonathan Bernstein and James Greer’s script. Better yet, he forms a vision that is unquestionably his own. It’s the consequence of an auteur making good use of his multifaceted creative control (directing, shooting, and editing here), letting the audience process more abstract ideas in conjunction with their investment in the story and its characters.

Soderbergh never feels that Sawyer’s eventual actions were preordained by any genre convention, in the same way that there was no reason the character had to be put through so much suffering to begin with. He takes the mold of a familiar story and makes it something else altogether, arguing that multiple social ills worked in tandem to bring Sawyer to her internment. The hospital’s administrators watch as she is pumped full of medicine to subdue her, and when they are ready, they are ready to discharge her and turn her into a statistic for their own testimonials. They wish to tell her about all the good things they’ve done for her, as part of the sickening intersection of vulnerability and financial exploitation that they live in. All the while, they neither know nor care that the creator of Sawyer’s trauma is among them, fitting in all too well to help as they turn her suffering into an opportunity for their own self-reward, treating her humanity as an obstacle to their own pleasure.

One thought on “Unsane — Review”