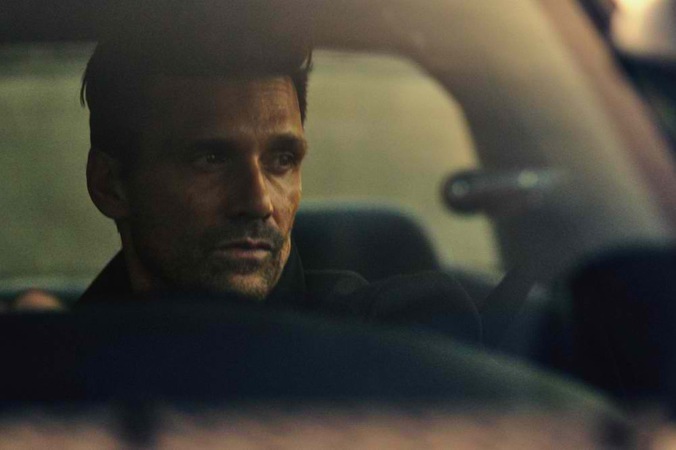 Frank Grillo in a scene from Jeremy Rush’s Wheelman.

“The film works because of its relentless pace, and the strength of Frank Grillo’s lead performance as the lead character.”

He is there, in the car. The phone rings every few minutes or so – either it’s his daughter, his ex-wife, his associate, or the man who is threatening to kill him if he doesn’t do exactly as commanded, which in and of itself could lead to other men killing him. He drives, he responds, he fights his war on many fronts. Jeremy Rush’s Wheelman exists in this field of simple tension. The film works because of its relentless pace, and the strength of Frank Grillo’s lead performance as the lead character. He’s a former racecar driver who finds himself in dire financial straights, acting as an occasional getaway driver. This job goes wrong, he’s on the run from his clients at the behest of another unknown entity. It could be anything from a single dissident to the ever-extended arm of the mafia. The fear is in the unknown.

If Baby Driver showed us the effectiveness of an excessive car chase movie, Wheelman shows us the frugality of a stripped-down car chase movie. At less than an hour and a half, the film winds up, springs into life, and we hold on. The camera almost never leaves Grillo, and most of the people he talks to are never seen. Yet they either hold his life in their hands, or he holds his life in theirs. The balance between his desire to outsmart the voices at the other end of the line, and the need to protect his family, which The Powers That Be are all too aware of, charges the conflict.

Rush is not a subtle filmmaker. He doesn’t hide anything up his sleeve. It’s possible he might be wearing a sleeveless shirt to begin with. The road he constructs is straightforward without any sudden detours or scenery. But it’s well paved, and runs with a smooth precision. Wheelman needs Grillo to move beyond the elemental nature of its script. It’s blessed to have him, as he focuses his eyes forward and delivers his lines with a terse collectiveness. Lesser actors have trouble handling such a foundational kind of lead role, and swallowed up by their surroundings, allow the film to happen to them. Grillo’s character may be caught in the uncertainty of the moment-to-moment action, but his performance is as controlled as you could imagine.

The flipside is that Wheelman risks becoming but a character sketch.  The dialogue is obtuse, and the Wheelman’s personality is just a faint sense of being hard-boiled. What causes the movie to operate well in the abstract leads to the implication that none of what goes down matters as much as it should. It’s possible that you may not guess exactly how things resolve themselves, but it’s equally as possible that you may not care. Keeping things simple, especially in the thriller genre, is essential to structural success, but tipping too far in the other direction causes importance to become implied and the screen to only serve as a report.

So what else can be said? It all comes back to Grillo, the crisp cinematography, and the sharp editing. The movie may be underdeveloped, but it is not underthought. The ambiance of the city streetlights in their various shades of whites and yellows cause a kind of sickly dread. The sly cuts between the other cars on the road – is that the guy who tried to kill him earlier, or is that just a random driver? – are carefully mastered to add momentary fear, replicating the dissonance felt in the titular character. Wheelman is concept art – it gives us a taste of as many different things it could be. As a sampler of possibilities, it invariably shows us the possible and disappoints us a little when it ends up pulling back. But there is no questioning its capability in showing what can exist.