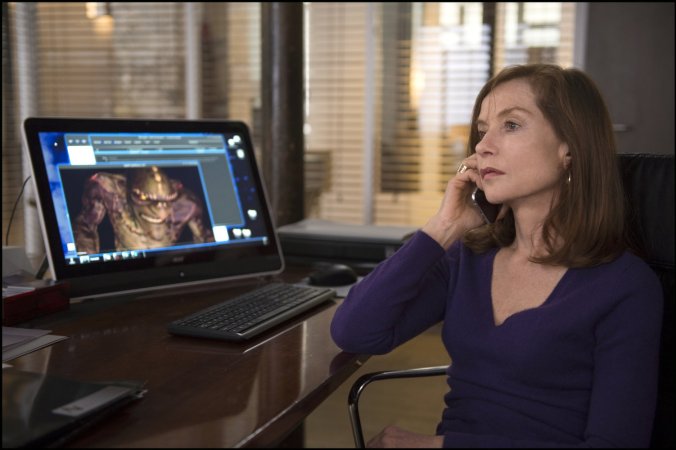 Isabelle Huppert in a scene from Paul Verhoeven’s Elle.

“It’s an experiment of a movie, where these things work in spite of themselves, and we keep watching.”

Of course we are disturbed. The first scene of Paul Verhoeven’s Elle sees Michèle (Isabelle Huppert), lying on the floor of her home,  pinned down to the ground as she is raped. The act is almost over, then the masked assailant runs away, and she is left there. Then she gets up, cleans the house, and goes about the rest of her day. Eventually, when she mentions the assault to her mortified friends, she mentions it in the way that you might recall an interesting article you read in a magazine. Did you call the police, one asks. No, she replies with incredulity.

She runs a video game company. Right now, they’re working on a rather overt project, which features a cutscene in which a female character is graphically murdered by a tentacled creature. Michèle watches the footage with her staff, and without a moment’s hesitation, demands it be more horrific. After all, that’s what sells. We’re confused. It’s clear that she’s traumatized, and is desperately trying to figure out who raped her. But she’s determined to figure it out on her own, devise her own response, receive her own closure. Stay out of it.

In real life, there is no set response for a victim of sexual assault. Every person is different. But in the movies, everyone seems to react the same way to everything. The best thing about Elle is that it does not tell you how to respond, in as much that it doesn’t create a given way for its characters to respond. The lengths to which Michèle goes to find answers and dig into her psyche, and those of the people in her life, is deeply uncomfortable to watch. We might conclude that she’s mentally imbalanced. But what does it matter? This is one of the most complexly written characters that a film can give us, because she isn’t restricted to what we expect, or what we think we would do. She does everything for a reason, even the things we could never imagine a “normal person” doing.

The French word “elle” translates to “she” or “her.” This makes sense. Elle balances a busy set of threads, and it can feel like an emotional whirlwind, but we always start with her. She is an established fact. Another established fact of the movie is Isabelle Huppert in the title role, who gives a performance so understanding and crucial that it’s impossible to imagine anyone else even attempting to do what she does. She and Verhoeven had to trust each other immensely, because this movie goes to places that few other filmmakers would dare to go, and few actors would want to go.

For all the grief that the director has gotten over the years – in the ’90s, he made the lurid Basic Instinct and the tacky Showgirls – he knows what he’s doing here. Moving carelessly with this story would have made it irredeemable. It’s filled with violence, with confrontation, with irony, with comedy. The film juxtaposes Michèle’s hunt for her rapist, and the conflicted feelings she finds when she discovers who it is, with the pre-existing dysfunctions of her world, from a disorganized work life to a family with dozens of problems. Some of the developments in the side stories are played in such a way where you could be amused, or you could be surprised. Verhoeven lets you think for yourself. How scary is that?

The movie works, and it’s a miracle. Yes, there are times when the relentless overbuilding of events leads to a deflationary falling action. Yes, there are more questions raised than those answered. But Elle has a commanding trance, from the heavy power of Huppert, to the twisting steering of Verhoeven. Anne Dudley’s lush string score underlines the action with the only real music it could ever have had. Straddling the line between examination and exploitation, mind and matter, catharsis and upheaval, we realize we have witnessed the rarest of results. It’s an experiment of a movie, where these things work in spite of themselves, and we keep watching.

We often use the word “challenging” to describe films like this, but that seems derivative. Elle is reflective. Its meaning is reliant on what you bring to it, although it provides you with all the information you need to draw any conclusion that you wish. This is what makes it all the more powerful. Is it a heady thriller? A thorough, shattering character drama? Or even a dark satire about society’s impression of empowered women? It’s a shame that we tend to compartmentalize our takeaways into one option, because there’s a much better discussion to be had here if you acknowledge its ability to be a little of everything. It dares us to believe that its climax is satisfying in a traditional sense, or that its resolution is healthy, when another movie would use it as a chance to wrap anything up in a neat little bow. Verhoeven finishes his story and fades out, but that’s when the real discussion begins.