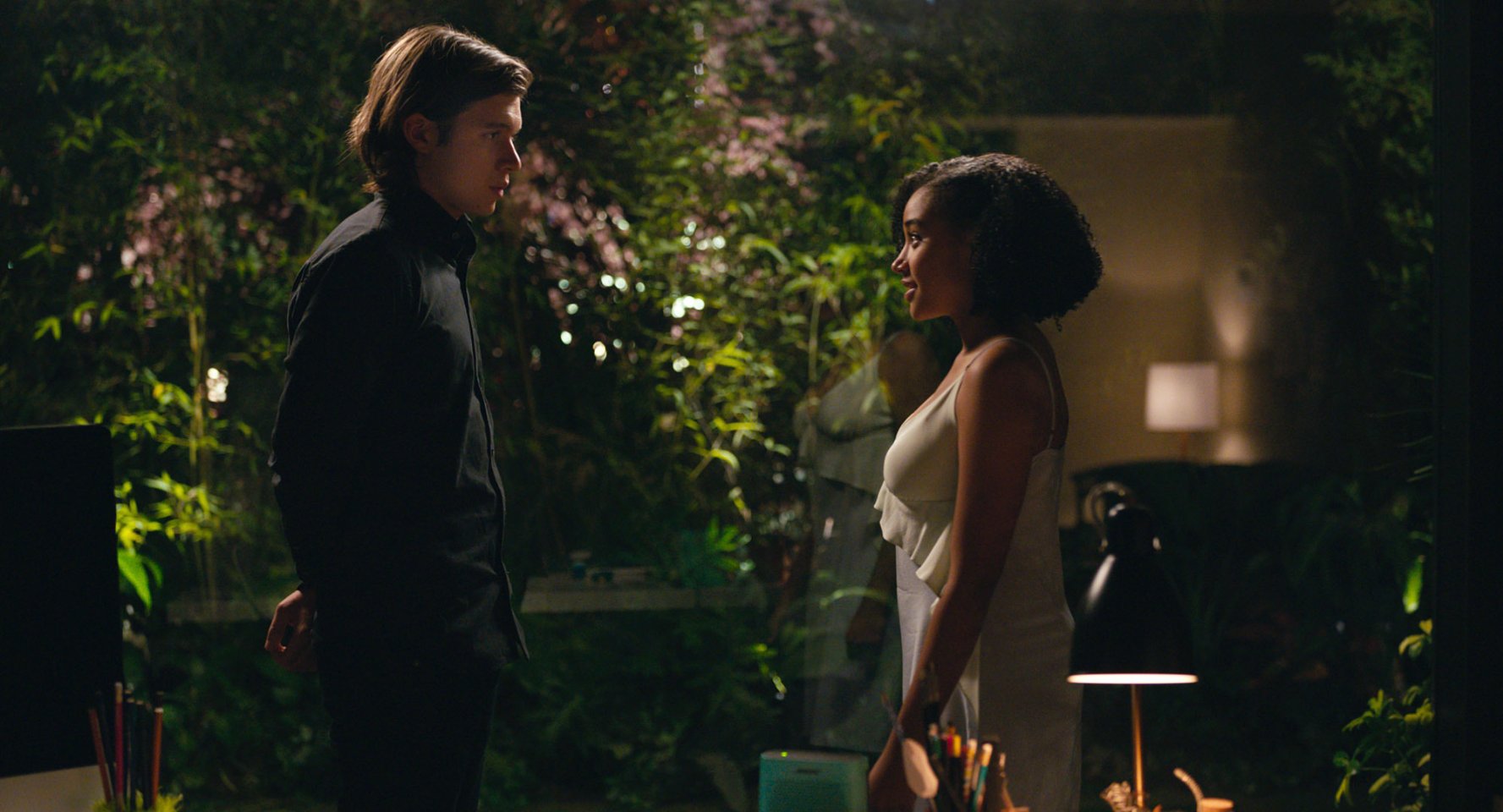 Nick Robinson and Amandla Stenberg in a scene from Stella Meghie’s Everything, Everything.

“A movie made by talented humans who use ideas seemingly given to them by malfunctioning machines.”

Maybe it makes sense describing it like this. Stella Meghie’s Everything, Everything is told in a roughly three-act structure. The first act is intriguing. The second is charming. The third should be committed to an institution. It is centered around a truly awful plot twist, compounded with so many inane character actions, that it feels like it was written by someone who had not been shown the rest of the story, and told to make it up as they went along. In its 30 minutes, it threatens to derail the previous hour’s momentum with such alarming speed that you feel the need to get out of the way in case it barrels through the screen and hurtles toward your chair.

It isn’t always like that. It starts nice. We meet Maddy (Amandla Stenberg), an eighteen-year-old girl in suburban Los Angeles. She lives in a big house with giant windows, which looks like it came from one of those documentaries Corning makes about the world of tomorrow. Her mother (Anika Noni Rose) is a doctor. She’s hired a nurse (Ana de la Reguera) at home, that looks after Maddy when Mom is at work. There’s a good reason for this – the girl was born with a rare condition which renders her immune system useless. She’s never been outside, because even the most cautious exposure to the elements could prove fatal. As a result, only a select few people are allowed to be around her, and only after they’ve been as carefully disinfected as everything else in the house.

She passes the hours taking online classes, reading, and writing. But the daily routines all change when a new family moves in next door. There’s a boy – oh, is there a boy. His name is Olly (Nick Robinson), and the two are attracted to each other immediately. At first, all they can do is text, but their bond grows, and soon, their feelings are undeniable. A deep-rooted desire for freedom, a new life, is palpable for Maddy. And even though she’s still sick, she’ll do whatever it takes, scale the most insurmountable odds, to escape the confines of her home and be with him. She may be risking her life, but she also wonders, what’s at risk if she hasn’t lived yet?

Any reaction you had to reading that plot summary is more of a reaction than Everything, Everything has to the vast majority of things that happen within it. It handles its story with clinical caution and deep removal. Major moments – which range from a meet-cute, to the details of Maddy’s condition, to the development of her and Olly’s relationship, to a plot twist which informs us that one of the four characters that I mentioned in the synopsis is legitimately deranged – are depicted with bizarre neutrality. Lines like “I’ve been trying out gene therapy” and “What’s your favorite color?” are treated as throwaways of equal proportion, and are revisited the exact same number of times. If you threw Hannibal Lecter into the middle of this movie, it wouldn’t notice.

But while the script may be tentative, the performances are well staged. Stenberg and Robinson have good chemistry, that clichéd review word that is often invoked but rarely defined (my strategy: imagine the two characters in question sitting at the same table in a coffee shop. Do they seem like a couple, or strangers that have to charge their phones at the one open outlet?) In their case, if you walked into a Starbucks and saw Maddy and Olly, you’d believe that they knew each other before their batteries died. Everyone is fine. They’re gifted actors. They survive the Great and Terrible Twist. That the stars involved are able to lend it even a shred of credibility is a towering testament to their respective abilities.

Cinematographer Igor Jadue-Lillo frames the entire film in these sturdy medium shots which make information and reactions to the information look identical. Everything, Everything is a movie made by talented humans who use ideas seemingly given to them by malfunctioning machines. It gets two stars because the half of the movie in front of the camera – from the performances to the set design – is great. The half behind it comes and goes. When it comes, it holds everything up and you’re invested in Maddy’s future with Olly, and her struggle. When it goes, the Great and Terrible Twist happens. It crams numerous diversions, rug pulls, and jaw-drop questions into its final half-hour, and leaves every thread hanging in the air as if nothing happened. Maybe one day I’ll rewatch the film and try to piece it all together, but it’ll be many years from now, when I’m living in my own glass house like everyone else, and presumably, I will not throw stones.