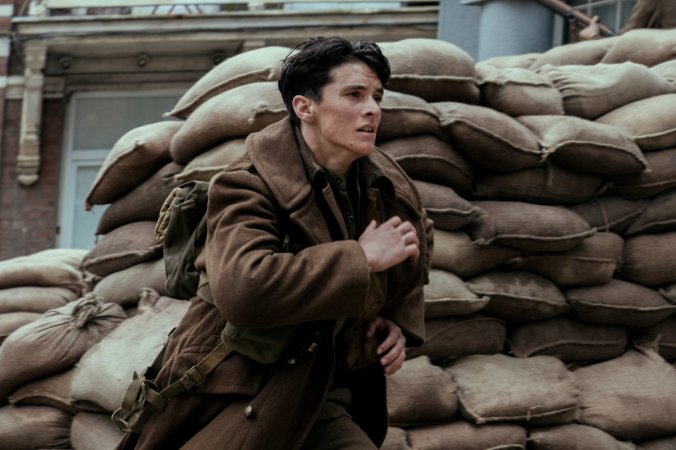 Fionn Whitehead in a scene from Christopher Nolan’s Dunkirk.

“For all the flaws in its vertebrae, Dunkirk still shows us that [writer/director Christopher] Nolan is as strong a visual artist as he’s ever been, and the stripped-down nature of the execution here gives us a chance to observe the merits of his screenwriting talent.”

The most impressive decision that Christopher Nolan makes in Dunkirk is allowing his plot – which is, in scale, immense and consequential – to contain itself within the most limited scope possible. The enemy is never seen onscreen, their effects a more apt, omnipresent standin. The war stretches on infinitely outside the boundaries of its world, existing in a space where the era before it is irrelevant. The surrounding political and global environment is also pointless: aside from the last few seconds, Winston Churchill is never even mentioned. As a result, the film is without narrative excess: it’s 106 minutes long, living up to the single noun simplicity of the title. Most characters, for better or worse, are never given names outside of the end credits.

Yet the story is presented in an unambiguously past-tense manner. Dividing the events of the evacuation into three sections – land, sea, and air – Nolan shows off the endless number of moving parts which the mission required, as interlocked as the parts of the stopwatch whose sharp ticking provides acts as a metronome for Hans Zimmer’s score. Without names, we recognize faces: that of a young soldier (Fionn Whitehead), who barely survives the city of Dunkirk itself, and faces even more challenges as an evacuee; that of a middle-aged man (Mark Rylance), captaining a small yacht with his son (Tom Glynn-Carney) and a local, teenaged assistant (Barry Keoghan), who are part of the civilian-populated mission to undertake the act of evacuating; those of pilots who make the dangerous journey across the English Channel in the air, dealing with deft, sudden bursts of life-threatening combat from the Luftwaffe.

Nolan’s ensemble drama plays around with the timeframe that each piece uses up – the land segment occupying a week, the sea segment occupying a day, and the air segment occupying an hour. He cuts between them fluidly. In his quest for structural minimalism, he not only drops us into the action, but makes the daring presumption that his audience understands what the Dunkirk evacuation was. Regardless, a problem he encountered with the overplotting of Interstellar is avoided from the get-go.

And moment to moment, the film operates very well, the pacing perfectly complementing the urgency of the events onscreen. There’s a vividness to Hoyte van Hoytema’s cinematography, which, despite depending on various shades of muted-out, exercises a great sense of humanity through tight pushes on faces. Down the line, the performances are all fine. As the movie is light on dialogue, it calls attention into the art of the reaction, movement, and the peculiarities of body language. The newcomers – Whitehead, and, as you’ve heard, Harry Styles as a fellow soldier – manage to hold their own against the cast’s more seasoned veterans. It’s all part of Nolan’s skill in creating worlds which are immersive in their own presentation.

But simultaneously, the choppy, pieced-together nature of the story structure serves as a detachment, as Dunkirk is forced to rely on big, sweeping setpieces to convey minute emotions. The precise editing of individual scenes clashes against a non-chronological nature – recall that business about weeks, days, and hours. At times it seems as if we are about to understand how what happened to a character earlier led to their later state, but the script is frustratingly asymmetrical in regards to what it considers important. There’s nothing wrong with how the film seeks to present itself as one of the more intense, direct recreations of a single piece of war history, yet there’s also the notion that Nolan ends up overcomplicating things with his intent to mimic the parallelism of that famous post-evacuation Churchill speech.

Yet for all the flaws in its vertebrae, Dunkirk still shows us that Nolan is as strong a visual artist as he’s ever been, and the stripped-down nature of the execution here gives us a chance to observe the merits of his screenwriting talent. As a filmmaker who typically uses the overt to the point of it feeling like a crutch, this is an admirably staged and well-resourced dismissal of the most basic criticisms he’s typically dogged with. Within all the noise, the commotion, and the disorientation which overwhelms (both intentional and unintentional), there is an active glimpse of the specific personal struggle which drives the participants of these conflicts. That the movie never allows us to view these anonymous characters as ragdolls, shows that it has not lost sight of why this story should be told.