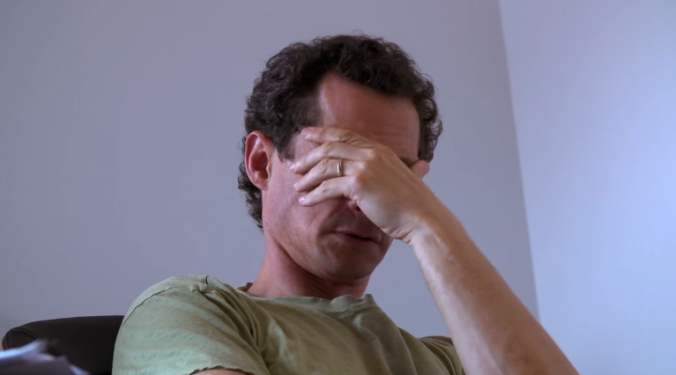 Anthony Weiner in a scene from Elyse Steinberg and Josh Kriegman’s Weiner.

For a while, it looked like Anthony Weiner was going to make a comeback. Two years after resigning from the House of Representatives in 2011, following a much-publicized sexting scandal, he was mounting a campaign to become the mayor of New York City. There was a huge “second chance” narrative mounting around him, he started leading in the polls, and his signature fiery rhetoric was building a steady stream of supporters, as it had done in the past. In short, the prognosis looked good for him to secure the Democratic nomination and make it to the general election.

And then the skeletons in Weiner’s closet came roaring out again. It was the same as before, but with the added insult of the new messages being sent well after his resignation, crushing the presumption was that he had learned his lesson. Suddenly, this idea of forgiving and moving on seemed much less palatable to New Yorkers, since it seemed like the person in question wasn’t holding up his end of the bargain. Once again, Weiner found himself the subject of an international media firestorm, while desperately trying to hold together the vestiges of a campaign that was plummeting to the bottom. At the same time, he was working to preserve his marriage to Huma Abedin, a notable politico in her own right, who had been spurred by her husband’s behavior in the past, and now found herself dealing with it all under a newly intensified beam of public scrutiny.

Elyse Steinberg and Josh Kriegman’s Weiner is a riveting, intimate, and frenetic depiction of Weiner’s mayoral campaign, and its rapid turn for the Sisyphean.  It runs at a taut 97 minutes, covering everything from the first days of his bid to the night of the Democratic primary, when he crashed and burned with less than five percent of the final vote, and had to be hustled into his concession party through a building half a block down in order to avoid interacting with the woman he had been sexting at the time. She was right there down the street, with a camera crew behind her as she thought up some caustic quip to toss in his direction. Obviously he and his handlers weren’t in the mood to deal with yet another publicity disaster, although one retrospectively wonders if any more damage could have been done to Weiner at that time.

It’s moments like these when Steinberg and Kriegman are unable to downplay the fact that this all seems like a dark satire that a jaded writer would slap together. Then again, this makes the proceedings all the more entertaining to relive, and do so interestingly from the inside. A congressman named Weiner has to resign because of – what else – a sex scandal, and then tries to turn things around, but is foiled by a recurrence of his old ways, snooping around online using the hysterical  pseudonym “Carlos Danger.” Throughout Weiner, a barrage of clips from late night talk shows and cable news editorials are shown, with the hosts of the respective programs in thorough disbelief, chomping at the bit to throw out the latest witticism about this operatic mess. It all amounts to some of the most uncomfortable laughs and cringy smiles that any movie could dream of producing, enhanced because everything here actually happened.

The film doesn’t attempt to diagnose its titular subject, never going down the messy path of clinically analyzing him and trying to determine what his problems are. Weiner once says in a public statement that his candidacy is about more than just him, and in a way, the movie is determined to mirror this broad claim. It’s about Anthony Weiner, but it’s also about Huma Abedin, and about the volunteers and employees who work for the campaign, and about the twenty-four hour news media salivating over each sordid detail, and about the gruff, instantaneous volatility of New York politics. This a screamingly fast look into what amounts to a tremendously exposed trainwreck. Steinberg and Kriegman’s fly-on-the-wall style (which is passive-aggressively commented on more than once by those onscreen) is relentlessly omnipresent, capturing intensely wrought conversations between Weiner, Abedin, and a smattering of advisors, as they talk in hushed voices about how to proceed in the most dire of moments.

Whenever a high-profile scandal occurs, we as citizens see it from the outside, attempting desperately to glean every relevant detail from evasive press conferences and anonymous speculation. Weiner offers us the rare opportunity to learn how these things are dealt with from within– abstractly, coming off as a film about machines breaking down. It does not take sides, refusing to either sympathize with Weiner or pummel him into the ground. Certainly, Steinberg and Kriegman had collected enough footage to create whatever slant that they wanted, but it is to their credit that they do not.

Of course, Anthony Weiner has been back in the news again this year, when a third set of sexts emerged in late August. This movie was edited and released before then, and does not know what happened. However, it is such a well-made document of its own events that the picture remains effective and self-contained, not only operating as an account of the 2013 mayoral campaign, but also a thrillingly produced dissertation of public relations nightmares in the twenty-first century, which is a different beast than ever before, and impossible to control or manipulate from any single side. It’s upfront, untamed, and it all hangs out there – sometimes literally.

One thought on “Weiner — Review”