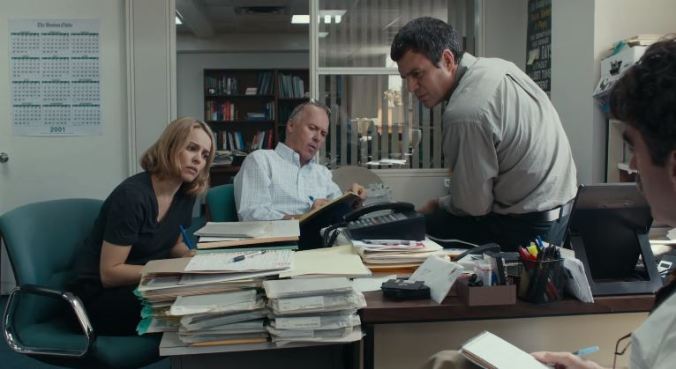 “A tightly edited drama trained on the power of the patience required in piecing together an investigation of significant magnitude.”

Boston’s like a small town, a character says at one point in Thomas McCarthy’s Spotlight, and the rest of the film backs up that claim. Even though it is Massachusetts’ largest city, Boston is renowned for its close-knit communities and comparatively heavy religious iconography. For a sizable chunk of the population, the Catholic Church carries a lot of meaning, and as a result, the city’s archdiocese wields high influence. However, this also means that any criticism of the church, its administration, or its clergy can result in heavy backlash, attempts from said church to cover up the negative press, and a very short shelf life for the perceived validity of the story. This is what The Boston Globe’s investigative team was up against for several months in 2001.

The name of the group is Spotlight, and their job is to research and perform long-term investigative journalism. An average article can take anywhere from a couple of months to a year to finalize, according to senior member Walter “Robby” Robinson (Michael Keaton). Spotlight’s newest story, in the shadow of the paper’s pragmatic, vacant editor (Liev Schrieber), is to look into the pending prosecutions of a handful of priests accused of molesting children over the combined course of several decades. Michael Rezendes (Mark Ruffalo) is assigned to write the first article, which will undoubtedly make a splash. Months of research, painful interviews with surviving victims, and multiple near-dead ends, courtesy of the church trying to cover its tracks, impede the team’s progress, making an already difficult-to-track story infinitely harder to pull off.

Spotlight is a tightly edited drama trained on the power of the patience required in piecing together an investigation of significant magnitude. Indeed, it’s a movie of immense abbreviations – conversations often happen in short, clipped exchanges, and the passage of time is only rarely marked with title cards, but rather through visual cues, like Christmas trees in houses and lights congressing on lawns. McCarthy, alongside co-writer Josh Singer, also smartly decides not to focus the tension of the 129 minute film on questioning if the investigation will have an ending. Of course it will, this actually happened, and we know that the coverage of the story won The Boston Globe’s Spotlight team a Pulitzer Prize. We know how it ends, but not how it got there.

An eclectic, engaging ensemble cast, led by sturdy work from Michael Keaton and Mark Ruffalo make Spotlight a fantastically acted film. A row of character actors playing surviving victims of the priests’ molestation deliver wrenchingly effective performances. Also worth mentioning is Rachel McAdams’ understated turn as Sacha Pfeiffer, a Spotlight reporter who interviews and researches whilst grappling on how to approach the deeply sensitive story, knowing there are many Bostonians like her devoutly Catholic grandmother who may not listen if it’s pulled off incorrectly. The acting prowess visible in the movie is infinitely helpful in advancing its emotional depth and thrilling examinations.

While the film is unable to fully congeal in terms of pacing, demonstrable in elements such as a fairly useless prologue and the occasional conversation which, for all intents and purposes, is repeated under slightly modified circumstances later on, the script moves far more fluidly than many other pictures of its chronological scope. Chalk that achievement up to McCarthy and editor Tom McArdle. It lacks a particularly gargantuan impact, but its relevancy is still high, due to a Catholic Church which moves far too glacially on the issue at hand for any real change to happen in a satisfying timespan. McCarthy depicts this minimalistically, while making sure not to minimize the tragedy. Spotlight reveals itself as not a speculative exposé on abuse and abusers, but rather an overall gripping display of the raw potency of efficient reporting when it’s undertaken with resourcefulness and integrity.

P.S.: The Boston Globe’s website has archived the real Spotlight team’s coverage of the molestation cases. You can find it here.