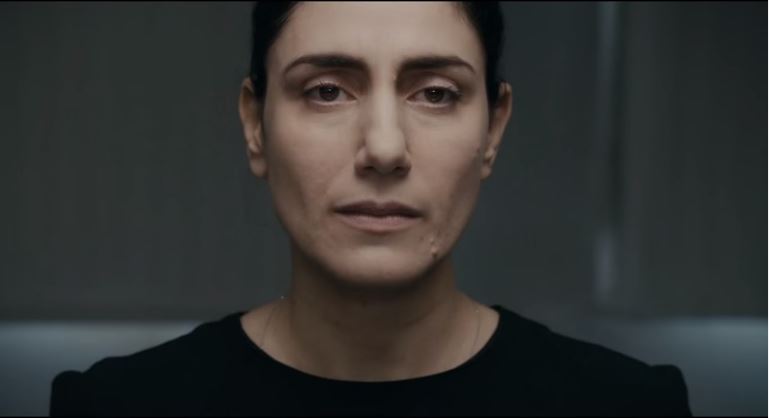 “A tight and tense exercise in minimalist drama.”

Diving headlong into the perils of a dangerous scenario  in the context of family law – a toxic blend of patriarchy, church, and state – Gett: The Trial of Viviane Amsalem is a film purposefully struggling for air, as it digs into religious divorce under Judaism in Israel. In such a context, a marriage only has a legal right to end if the husband allows the dissolution to occur, regardless of who filed for divorce. In the example presented in this movie, it is the wife, Viviane Amsalem (co-director and writer Ronit Elkabetz) who makes the first move. Her husband Elijah (Simon Abkarian) is unwilling to accept it, or even cooperate – he misses hearing after hearing, leaving Viviane and her lawyer stranded before the judges, who offer to punish Elijah for his absences, but often never follow through.

This goes on and on. When Elijah finally begins showing up, it becomes clear how much the legal system favors his views over his wife’s. Every time he is asked whether he will agree to a divorce, he says no. The court then requests that the couple live together for a few more months, and then return if it’s not working. And this happens over and over. Years go by. And Gett, presented nearly entirely through scenes in this small, white, blank courtroom, hones in on its perspective through Viviane, as she grows defiant, unwilling to let the system play her like it did to countless other women before her. She will win. Somehow.

Elkabetz, working with her brother Shlomi in helming the film, crafts a startling exposé into the extreme hardships that a woman in Viviane’s situation would face. Jeanne Lapoirie’s cinematography uses mostly medium and wide shots, yet still manages to adequately capture the claustrophobic pressures of every scene, each in interiors which miraculously feel more constricted and cramped as the 116 minute movie goes on. Devoid of a musical score, any bad-note overcooking is thankfully absent, as the story survives on its potency, the inherent drama from it, and the strength of the performances, particularly Elkabetz’s.

Gett only presents the marriage in question in small snippets, which has the negative effect of being unable to create a clear picture of the context at hand. However, despite this, the momentum that the plot gathers is essentially unaffected, and one’s interest isn’t severely curtailed. Viviane Amsalem is a well-drawn character, regardless of her limited backstory. Her desperation to be heard, respected, to be treated as an equal, is painfully potent and heartbreakingly apparent. The film is a rallying cry for change, even if it is not the stark feminist anthem a picture with that descriptor might normally be. The Elkabetz siblings have made a tight and tense exercise in minimalist drama, and it works with solid effect.