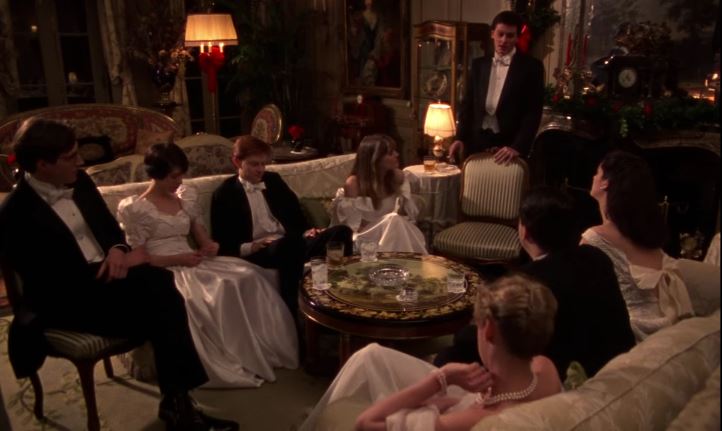 “The writing is literate and witty.”

How fascinating to consider the idea of the “débutante season”, that fabled time of year where the younger upper class would hold all of their elitist balls and droll after-parties. Such a life is portrayed in Whit Stillman’s Metropolitan, which celebrates its twenty-fifth anniversary this month (August ‘15), and seems to hold a fair amount of relevance in all of its observations. The movie has a complex approach to the one-percenters, and the children of the one-percenters. It is somewhere between empathetic portrayal, slightly tugging eyeroll, and overt mocking. Stillman’s screenplay is fairly autobiographical, he says, so the take he brings is likely similar to his own thoughts. The writing is literate and witty, giving a unique spin on a character type that would be portrayed as insufferable in most other movies (and maybe in real life).

Metropolitan centers on Tom (Edward Clements), a Princeton student who lives with his divorced mother (Alice Connorton) in a rather small apartment. It is the Christmas holiday, and one night, on a whim, he rents a twenty-five dollar tuxedo and decides to attend one of those débutante balls. The evening would likely turn out to be toothless and torturous had he not met the group known as the Sally Fowler Rat Pack – a group of people, about Tom’s age, who have rich parents and go to these balls in order to head back to the apartment of aspiring singer Sally Fowler (Dylan Hundley) and have those aforementioned conversations. They are intrigued by Tom, who is thrust into their world of forced intellectualism. Nick (Chris Eigeman) dubs the group the urban haute bourgeoisie – or UHB. Sooner or later, we realized that these are just normal people, looking for their paths in life, with friendships and relationships that bloom and die through their high-class lens – the only thing they know.

There’s a million different ways that you could unpack Stillman’s intent behind this film – in 98 minutes, there’s not as much of a structured plot as there is a series of loosely connected scenes, smatterings of on-the-nose dialogue between our titular group of metropolitans (sigh, or the urban haute bourgeoisie, if you insist, which is about as meaningful a term as WASP, in that it only states the obvious). Even while making arcane comparisons to the lesser works of Jane Austen and its critical reception, Stillman’s dialogue is written with a snappy genuity and delivered with strength from its cast, whose résumés were rather short at the time of production. Edward Clements shows a natural talent as the up-and-down outsider, who feels parts welcomed and alienated, and imbues Tom with a kind of underlying gee-whiz trait that is intentionally suppressed in his portrayal. He would only go on to appear in one other film, before retiring from acting and apparently moving onto ministerial work. He could have had quite a career if he so chose. Tom is our entry point into this world and Clements’ performance is a solid way in.

Stillman shoots his film in a blank slated, matter-of-fact style – from the carefully lit, stuffy-yet-open ballrooms to city streets at night, illuminated indirectly by streetlamps, storefronts, and light-up snowflake decorations. By deciding to eschew a more garish format or excessive focus on something like the contemporarily decadent mise en scène of his characters’ richly textured living rooms, he ensures that we are more attentive to his writing and the actors’ performances, rather than gawking at some absurdly expensive looking light fixture or bookshelf. Many directors would make the keen mistake of showing off rather than simply showing, but that error is not made here. The screenplay makes sure that it establishes safely the history of the characters and their personalities, and the scenery compliments it, rather than the other way around, which would result in a likely overdirected, underwritten effort.

A fair swath of viewers probably couldn’t care less about what stupidly rich kids do in their spare time. I didn’t before I watched Metropolitan, and I can safely say that remains the same after watching it. Despite penning comically loaded and complex dialogue, Stillman doesn’t have a lot to say in terms of message, which can both serve as a good or bad thing, nor does it seem he has a particular agenda at hand in making us care about these people more than we would have otherwise – they’re often frankly ridiculous. But even during the film’s most baffling moments when you ask yourself why you’re even watching this, what he does do is make a fair point – in the end, everyone has a core set of similarities. They worry, they laugh, they love, they fight. And amidst the blizzard and cover of overbearing snobbishness, it remains – and a quarter of a century later, still holds true.