“A promising film, with an astonishingly effective atmosphere and finely tuned performances, but a weak script that crawls rather than walks and leaves much unanswered.”

Up in Maine, northern Maine especially, the winters can be particularly harsh and unforgiving. Feet of snow pile down on town after town, as nighttime temperatures fall below 0°F on semi-regular occasions. Cold and dreary overcast skies are often one of the most prominent features of many exterior photographs of New England winters. This is replicated in Lance Edmands’ filmmaking debut, Bluebird. It is set in a small town in the upper cascades of Maine, in one of these winters. It deals with a tragedy within this town, and how its repercussions affect many different characters, as it threads outward to form its story. In this way, many critics have compared it to the plot of Atom Egoyan’s The Sweet Hereafter. But we aren’t here to compare movies to other movies as our main talking point, so it’s important to take what Edmands has created at face value. And what is created is certainly a promising film, with an astonishingly effective atmosphere and finely tuned performances, but a weak script that crawls rather than walks and leaves much unanswered.

The tragedy that forms around Bluebird concerns the one mistake of a schoolbus driver named Lesley (Amy Morton). One day, after dropping off her last round of younger students, she locks up the bus and heads home. The next morning, she is shocked to find that one child named Owen (Quinn Bard) fell asleep on the bus and was in the frigid vehicle all night, and in this moment Lesley realizes that she forgot to perform a final sweep and make sure the bus was empty before parking it for the night. She was distracted by, what else, but a bluebird passing by. Owen is rushed to the hospital. He is alive, but comatose and severely hypothermic. Lesley is placed on leave, and as one would expect to be under her circumstances, deeply distressed.

To her husband Richard (John Slattery) and seventeen-year-old daughter Paula (Emily Meade), the event spins off and becomes an exponentially pressing factor in their own pre-existing problems – Richard has increasingly less job security in his career the paper mill, and Paula becomes more and more emotionally dependent on her unstable boyfriend Brent (Brandon Wardwell). As for the family of Owen, his absentminded mom Marla (Louisa Krause) contemplates suing Lesley, but Marla’s own mother (Margo Martindale), who is more often than not Owen’s caretaker, suggests that she may have trouble gaining compassion from a court, considering the fact that Marla was drunk for the whole evening that her son was slowly freezing on the bus.

So yeah, this movie isn’t very happy. Actually, let me rephrase that – God, is this a depressing film. But that’s not to say it’s bad. It’s photographed by Jody Lee Lipes, who capitalizes on the setting and environment in impeccable wide vistas of heavy snow, creating a tranquil beauty with a deeply unsettling subtext. In addition, Edmands shows great potential as a director, evident in the way he guides his talented cast, extracting powerful performances. He is masterful in how he tracks and executes particular scenes, and they come off with a sense of naturalism and emotion that carries it forward. But his ability as a screenwriter is more questionable. Bluebird is 90 minutes long, and the pacing is shrill and uneven. The first thirty to forty minutes are a slog. Then it establishes something resembling consistency, and prattles along. When the last half-hour hits, the film speeds up significantly, but at the risk of leaving whole characters and plot threads decidedly unresolved, despite the fact they have been painstakingly established.

A staggeringly good performance from Amy Morton is what is the most instantly visible. It is one that layers grief, depression, and roughly shaken humanity. It can be gripping and thoroughly heartbreaking. No matter the shakiness of Edmands’ writing, or the sloppy pacing of the film, it is Morton and her immediate supporting cast that create well made pieces to move on the dynamic scenery that Bluebird takes place in. The movie is mostly gorgeously done, but the script is iffy. And a script can’t be iffy. (I kind of like the Schreiber theory, in case you haven’t noticed). But if you have so many positive qualities, from acting to direction to atmosphere to emotion, and they’re all assembled in your first film, then I suppose I can’t hold Lance Edmands too much to his professional shortcomings. If making movies is like anything else in life, it probably takes time to get the hang of things. 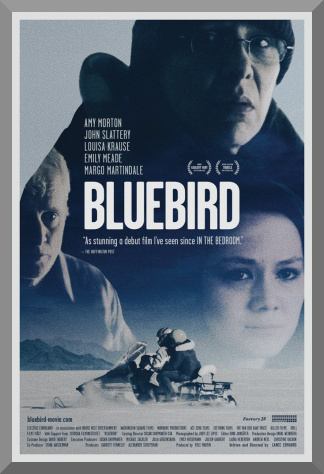