“A tenderness that is palpable without being grandiose, and finally, affectedly romantic without manipulation.”

Bavo Defurne’s North Sea Texas is a measured exercise in exquisite agony. It is careful and sensitive, with complex emotions driving the story, hidden just beneath the surface. There’s something vaguely dreamy and unreal about everything, from the flowing setup of the dialogue, to Anton Mertens’ colorful, sudsy cinematography, to even the main song on the soundtrack, “Wooly Clouds” by a band called Little Auk. With this, Defurne creates a setup of nostalgia, which could possibly be designed to be viewed as the main character recollecting a vital chapter of his life from decades following the fact. These memories are presumably imperfect, but steeped in the painful world of melancholy, and the way this is brought to film is impeccable.

And the story depicted is that of Pim (Jelle Florizoone), a fifteen year old boy living in a small town near the Belgian coast. I am told that the film is set in 1970, but there’s something about the aesthetic that casts a glow of the late ‘50s. Whatever. Anyway, Pim’s mother Yvette (Eva Van Der Gucht) is an absentminded accordion player with a caustic love life. At times, she may as well not be home at all. Because of this, Pim has found a second home down the street, at the residence of a woman named Marcella (Katelijne Damen) and her two children – Sabrina (Nina Maria Kortekaas), who is around Pim’s age, and Gino (Mathias Vergels), who is about to turn eighteen. From the outset, it is clear that Sabrina harbors a crush on Pim, but the feeling goes unreturned, because for some time now, Pim has been irrevocably infatuated with Gino. He sketches pictures of him on scrap paper, writes his name in capital letters around the margins. And for some time, Gino appears to return the feeling, with the two sparking a brief but intense romance, under the strict rule of not telling anyone. But they grow apart – Gino spends increasing amounts of time with a French girl on the other side of town, to the point where he leaves the country with her. All Pim can do is navigate his family life and feelings, whittling his time away around town (including a local pub called “Texas”, which gives the film its title), and simultaneously entertain the overwhelming hope that Gino will come back to him.

Based on a Dutch novel by André Sollie called Nooit gaat dit over (someone get an English version in print, stat), which literally translates to “What is this about”, North Sea Texas refreshingly decides that you can make a gay coming-of-age film without an obsessive fixture on the fact that the main character is gay. What I mean by that is while the film addresses the societal conflicts about a non-heterosexual orientation in the mid-twentieth century, the idea of “coming out” is entirely unnecessary to the plot, as well is the concept that Pim would have to carve out a specific niche or identity. Simplicity is at the heart of Defurne’s approach, a feel that transfers into the visual scheme, where colorful and well-designed interiors work against bright outdoor tones, from a suburban street to waves crashing on the beach.

There’s no doubt that Defurne keeps this minimalist approach in his method to developing the characters, as well – Pim has relatively little expository dialogue, but he is still moderately multi-dimensional. Considering that the film is in a foreign language, it’s hard to tell to what degree this is attributable to in the writing or what is derived from Jelle Florizoone’s performance, who, to his credit, hits all the right emotional beats. A scene where Pim wraps his arms around Gino’s torso as they ride around town on Gino’s motorbike is sweet in the most precariously innocent way, elevated by the body language of the two actors. And when you boil it down, Florizoone is the glue holding North Sea Texas together, not just because he portrays the main character, but also due to the fact that some other parts, such as that of Gino’s mother Marcella, appear to be written more as a source of barely disguised story progression and a cranking out of one-note personality generation rather than an emulation of anything close to a real person.

After moving into the third act, the movie has its share of rather well done sequences (including something reminiscent of The 400 Blows, cinema’s ultimate coming-of-age story, as well as a final scene which is a controlled but cathartic release of everything that had been building up for the past half-hour). It also suffers from meandering plot developments whose payoffs can occasionally verge on the absurd. Defurne, who made this 98 minute feature debut after two decades’ worth of acclaimed short films, still needs a bit of practice in crafting longer stories, but the raw talent and cinematic experience he exudes here, combined with a fascinating basic setup, strong acting, and gorgeous scenery make North Sea Texas worth seeing. It moves in its own way, in such a manner that you really have to watch it for yourself, evoking a tenderness that is palpable without being grandiose, and finally, affectedly romantic without manipulation. 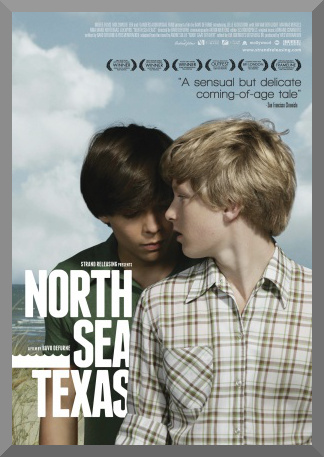