There are, of course, different types of very good movies. However, sometimes it feels that the majority of notable films often occupy the drama category. These can be excellent, although often depressing and draining affairs. I have indeed recently seen more than one entry to that category which are recommendable (whether I’ve reviewed them or not), but we often forget about the other side of the spectrum – great movies that are happy, funny, and energetic. The Lego Movie is a shining example. It’s a real treat of a motion picture in just about every way, and joins the group of kid-based animated films that really do resonate for everyone else that watches it, both in execution and message (in that way, I was reminded of Toy Story, although I suspect I’ll always have a preference for those films).This breezy 101 minute film concerns Emmet (voice of Chris Pratt), an ordinary guy who lives in a giant city, entirely constructed of fellow Lego parts such as himself. He’s a normal construction worker, and lives by the book, and quite literally so – in the first few minutes, we see a montage of his day as he follows the steps in a pamphlet all about fitting in. The city (and many other places) is overseen by Lord Business (voice of Will Ferrell), who executes absolute control over his world and has malicious intent, but everyone is seemingly unaware of this.

One day, Emmet falls into a large hole and finds himself in a world he never knew existed. The first person he meets, who goes by the name of Wyldstyle (voice of Elizabeth Banks), mistakes him for the fulfiller of a long held prophecy first mentioned by former leader Vitruvius (voice of Morgan Freeman). Wyldstyle believes that Emmet is a very special kind of Master Builder who will save the world from Lord Business’ evil doing. Unwilling to say no, Emmet is launched into quite an adventure, where his companions include Wyldstyle, Vitruvius, and Batman (voice of Will Arnett), working together together to defeat Lord Business and his plan of destroying the world (On Taco Tuesday, no less).

The Lego Movie is just fun. It’s really, really fun. It never feels overlong, it looks fantastic, and the script by co-directors Phil Lord and Christopher Miller is absolutely brilliant, with jokes that constantly land, and also loaded with funny pop culture references that are thankfully never too forced. The screenplay also takes a surprising turn towards the end of the third act, where there’s an interesting and poignant emotional message, equally valid for both kids and parents. The delivery of this is even more surprising, and drives the point home without feeling overly sentimental.  The acting is equally credible. There’s a large cast of well known names on display here, which includes multiple names I didn’t even mention above, like Liam Neeson, Jonah Hill, Anthony Daniels and Billy Dee Williams (there’s a great Star Wars bit I don’t want to ruin), Alison Brie, and Charlie Day. They play off each other effectively. This is always a welcome thing in an animated film, which usually have all of its participants record separately.

The animation in The Lego Movie is incredible. The CGI recreates stop motion Lego movies in a very realistic way, even when creating events that would be unfeasible otherwise, like a giant wall of “water” rushing across an Old West-style town, with thousands of blue and white bricks sweeping across the frame. It’s colorful and exciting, but never overbearing. “Everything is Awesome” isn’t only the song that blasts through the beginning of the film and the end credits, it’s a proper descriptor of how this movie feels in general. Making sure to steer clear from the overly chaotic or immature, this is an excellently produced film. Watching it, you feel as happy as a German footballer. (Dear people from the future, I’m sorry you don’t get this joke.)

While it’s no surprise to hear that The Lego Movie is well worth your time, I was honestly surprised by how much it really worked for me. I like to think that I’ve become at least somewhat immune to pre-release hype on big movies, but here, what you’ve heard is probably not hyperbole: The Lego Movie is indeed a fantastic piece of filmmaking, an entertaining diversion for little kids and a witty, referential, and very legitimate movie for everyone else. 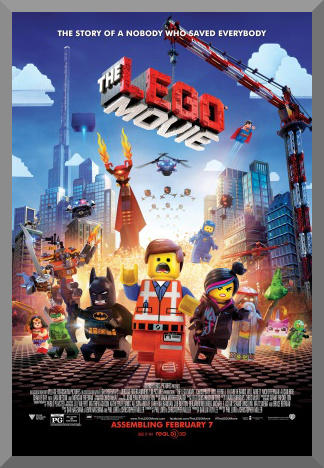 4 thoughts on “The Lego Movie”