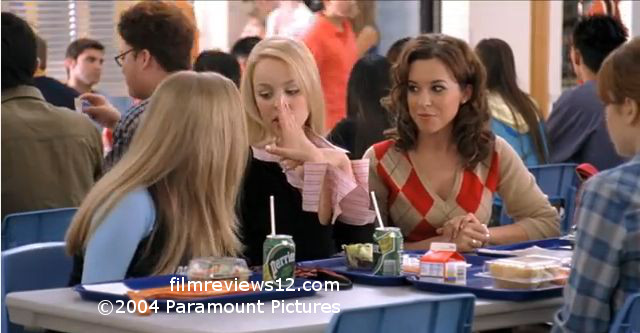 The Plastics, deep in discussion.

I bet at one point or another, Tina Fey envisioned a really good ending to Mean Girls, but we didn’t see it. Despite the fact that ninety percent of this movie is consistently funny and engaging, the finale plays out like an almost-finished screenplay was soaked in a steaming hot bowl of clichés. Otherwise, this is a movie that does indeed go far beyond what’s usually observable in a high school movie, and it should indeed be commended on that basis.

Cady Heron (Lindsay Lohan) is the daughter of two scientists (Ana Gasteyer and Neil Flynn) who has spent the majority of her life homeschooled, growing up in Africa, where her parents have been working. They have recently moved to Evanston, Illinois, and at age sixteen, Cady is about to attend her first formal school. It’s never easy for the new kid, and at first, the only people that give her the time of the day are sort of outcasts; the sarcastic Janis Ian (Lizzy Caplan) and the flamboyantly gay Damian (Daniel Franzese). From them, Cady learns of the most popular girls in school; Regina George (Rachel McAdams), Gretchen Weiners (Lacey Chabert), and Karen Smith (Amanda Seyfried). These three form The Plastics, where they are allowed to be as airheaded and materialistic as they want.

The Plastics, intrigued by Cady, invite her to eat lunch with them, and she is soon enveloped into their circle. The peculiarities come quick: Only wear sweatpants on Fridays, always wear pink on Wednesdays, and you can only put your hair in a ponytail once a week. The gossip is there too, as they own a “burn book”, where they cut out pictures of students and teachers from the yearbook and write nasty comments about them (I vote to name such books as “Perez Hilton encyclopedias”). Janis sees Cady’s popularity with The Plastics as an opportunity to infiltrate and humiliate the group, particularly Regina, and creates a plan to do so. What ensues is 97 minutes worth of animalistic struggles, sabotage, and slander at the top rungs of the social ladder with Cady attempting to dethrone Regina, soon because of her own desires rather than the initial plans.

In her script, Tina Fey has crafted brilliant commentary on our common need to be liked, never mind why or how shallow it may be. Every now and then, Cady imagines a particularly horrific scenario like a fight between animals in the wild – the participants will roll around, growling, and those around will jump up and down making incoherent noises. They’re throwaway sequences, but they provide the most effective satire in the whole film, and a backbone thesis for what the rest of Mean Girls conveys: Put a group of people together regularly for extended periods of time, and social Darwinist mayhem will ensue.

The actors bring efficiency to their characters: Lohan as the girl thrown around, the unknowing pawn of the terrifying structure around her, McAdams as the queen bee, willing to take down anyone for any reason, and Chabert and Seyfried’s characters basically prying to be carbon copies of their leader. One of the main catalysts of the plot is senior Aaron Samuels, Cady’s crush and Regina’s ex-boyfriend. He’s portrayed with a solid but unmemorable performance from Jonathan Bennett. Fey plays calculus teacher Ms. Norbury, who later shows more awareness of the events and psyches around her than the film initially suggests. Three other Saturday Night Live alumni are also present: Tim Meadows plays the principal of the school, Amy Poehler is Regina’s mother, and comparatively senseless, and as mentioned, Gasteyer.

Mean Girls exists a cut above what one might come to expect from something billed as a teen comedy, and if the ending wasn’t so neatly wrapped and typical, it could have crossed into a few more realms of greatness. This is a movie that’s engrained into a realm of culture, and I like to think that I can witness firsthand early signs of its timelessness – I have friends who very much like the film, and fully embrace it, even though we were all still rather young when it came out, despite the fact that a lot of things from its kind-of-recent-but-not-really era are mostly forgotten among most. It’s now ten years old, and Mean Girls’ basic messages and observations will hold true for a good long time, even if the film where they’re contained isn’t perfect.