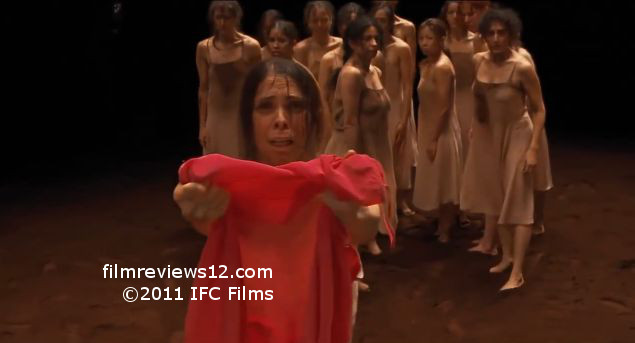 Part five of a six part examination of various recent documentaries, which I expect to finish by the end of the month.

This was a personally divisive movie. Wim Wender’s Pina is dazzling. It’s a visual spectacle. But it’s hardly entertaining. Maybe entertainment is not the point, you say, but I did not find it to be greatly substantive, either. I am giving it two and a half stars, and one hundred percent of that is for the spectacular cinematography, choreography, and dancing. It showcases some of the wonderful performances created by Pina Bausch (1940 – 2009), a German choreographer who designed fantastically surreal pieces for a passionate ensemble in Wuppertal, its members originating from all parts of the world. It almost didn’t get made, as Bausch died days before filming was set to begin. It, in its finished state, however, is a monument to the life and career of someone who was undoubtedly a true artist. I just wish I could have enjoyed it more.

You’ve probably deduced by now that Pina is not a documentary in the conventional sense. Not even the talking heads are normal – instead, the voiceover of a comment is placed over a video of the subject (usually a current member of the ensemble) staring before the camera. It creates the illusion of contemplation over obvious statements. Contemplation over obvious statements is indeed the entire point of Pina, both the film and the subject’s work.

The pieces Bausch created were innovations in the field of Tanztheater (dance theatre): silent, elaborate, and wordless performances to music and at least some variation of a narrative. They are highly interpretive, playing with a constant and wide number of elements, from a large patch of dirt to a big artificial boulder and gallons of water to a breathtaking and awe-inspiring scene involving chairs stacked on top of each other. Thanks to the cinematic treatment of the performances here, the shots are varied. Whether in a theatre or a picturesque outdoor (or indoor) setting, there’s always an unmistakably deliberate nature of the cinematography.

But I didn’t “like” like it, as I’ve mentioned before. When someone calls a movie “great” or even just “good”, it’s because the film made a connection with them in some way. And despite all of the frills and beauty on display in Pina, that personal connection never happened. It was a more or less passive experience, with some sporadic bursts of immersion peppered along the 103 minute production.

A star rating denotes how much I recommend a film, and the truth is, I can barely recommend Pina. Like all surrealism-based works, it is highly subjective. Most have embraced it unconditionally, but I just didn’t see it. Maybe I’ll watch it again someday and have a more (or even less) favorable viewpoint. Some movies are like that, and Pina seems like one. The final advice? If any of what was described above sounds interesting to you. See it. You’ll absolutely love it. If you’re only partially or not even warmed by the same passages, don’t bother. This is the unwritten rule of a halfway competent film review, and it applies especially here.