Mel Brooks’ Young Frankenstein is wonderful chaos. The 1974 comedy sustains a similar high-energy format for its entire 105 minute runtime, ensuring that even if a joke falls flat, you’re not bored at all. This takes talent to achieve, and talent is clearly what is shown here.

Gene Wilder (also co-screenwriter with Brooks) plays a medical school professor who is the grandson of Mary Shelley’s renowned mad scientist. He hates the fact that his surname will overshadow any of his achievements, so he attempts to compensate by revising and strictly enforcing the pronunciation of “Frankenstein” and constantly reiterating the statement that his grandfather was insane.

A man from Transylvania arrives and informs the man that he has inherited the estate inhabited by his ancestor. He is a bit baffled, but decides to visit, where he embarks on various events with the eccentric hunchback Igor (the wide eyed Marty Feldman, who often breaks the fourth wall with various remarks) and a local woman named Inga (Teri Garr), culminating in Frankenstein discovering his grandfather’s study and attempting to recreate his experiments.

Regardless of your taste in humor, you sort of have to admire a movie this constant and silly. This hyper overload of parody is what makes a Mel Brooks film, targeting the obvious, the Frankenstein films from the ‘30s. It’s there right down to the technical details, from sound cues to its presentation in black-and-white. It is intensely enjoyable in that sense, as well as a straight-up comedy in its own place. It’s near impossible not to smile as the doctor and his monster perform a garbled rendition of “Puttin’ on the Ritz” to a stunned crowd decked in elaborate eveningwear. (Obligatory joke about song title here).

Young Frankenstein is regarded in more than a few minds as an all-time comedy classic, and while I wouldn’t disagree in the most basic sense, I’m not sure I understand the pedestal that it is held up on. It’s certainly a good, enjoyable time and a more than decent way to spend an hour and forty minutes, but personally speaking, it doesn’t appear to cross that boundary into classic memorability or worthy preservation – it’s funny, but it’s not funny to the point of being noteworthy. There were more than a few times when I was underwhelmed by a scene. But that’s the thing about reviewing comedy and its subjective fields.

Judgment of impact aside, we hopefully can have a consensus on other things, particularly the acting. Wilder is great as Dr. Frankenstein, particularly from the second act onwards as he manically embraces his background, engaging in increasingly bizarre scenarios with his creation. Marty Feldman is very funny as Igor, and when you add Teri Garr, you have a solid dynamic and fusion of characters. The supporting cast is of a great array, from Cloris Leachman to Madeline Kahn to Peter Boyle as the monster and a round of other weird and wonderful characters, like a measured and robotic police inspector. Watch the scene where he nonchalantly sticks his fake arm in a fire. Kenneth Mars does a lot with so little dialogue.

Watching Young Frankenstein was indeed time well spent – from the surprisingly deep yet self-referential score by John Morris, to the established positives within the acting and writing. You’ve probably seen it already. At its best, it’s a rich source for laughs and entertainment. Mel Brooks even says it’s the funniest film ever made, and if you can’t trust the totally unbiased opinions of the director and co-writer as seen on the poster, who can you trust? 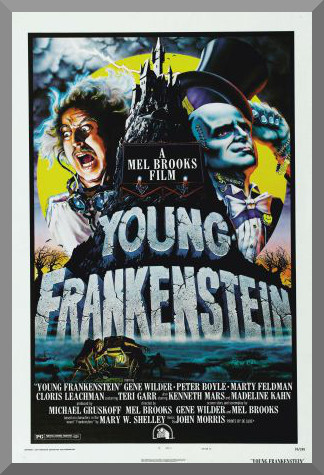