What Dreams May Come unmistakably wears its heart on its sleeve and doesn’t care what you think about that. For 112 minutes, this movie moves around from life to heaven to hell with a fair dose of awe-inspiring visuals among each.

The first act details the life of Chris Nielsen (ROBIN WILLIAMS), from meeting his wife Annie (ANNABELLA SCIORRA) in Switzerland, to their wedding, to their two children dying in a car crash. Chris and Annie are plunged into grief and despair, but eventually manage to move on, or as much as you can after something like this occurs. Four years later, Chris too is killed in a car wreck. He is led by the spirit of Albert, a man he knew in life (CUBA GOODING, JR.), first through his own funeral and the events following, and then to his own heaven, entirely reminiscent of a painting by Annie, who worked in art restoration.

As the story progresses, Chris learns that Annie is dead, and is in hell. According to his guide, this is what happens whenever someone refuses to acknowledge their existence or its cumulative value. Against advice, Chris ventures into hell in order to find his wife, regardless of what will stand in his way.

What Dreams May Come’s strongest suit is in its visual style. Shot on a film most used by landscape and nature photographers, the movie features vivid scenery. It is most notable when Chris first arrives in heaven, where the land inspired by a painting is made entirely of paint; when he grips a flower, it oozes out of his hand. When the scenes in hell occur, the visuals are fittingly surreal, horrific, and dark. At the risk of sounding like a cynic, the scenes in hell are the most memorable and admirable from a filmmaking perspective.

Bless this movie for its visuals, because without it, the fact that the script dissolves into nothingness as the end nears would be all the more obvious. Richard Matheson, who wrote the novel that this film is based off, was once asked what he thought of the film. He responded that he agreed with an anonymous Hollywood producer’s observation that “they should have shot [his] book”. After looking over some of the comparisons between the two, I find that the novel had few of the storytelling qualms that were there with the movie. When writing the adaptation, Ronald Bass apparently found it necessary to brush and wrap the story into an unsubstantive collection of ideas and plot points.

The acting also does part to save what may have been an even more underwhelming experience. Williams portrays Chris with great relatibility and skill, and Sciorra does a quite credible job, especially when Annie breaks down after losing both her husband and children. Max von Sydow has an important supporting part in the second half of the picture, and is excellent. Michael Kamen’s music is a plus, swelling and beautiful and enhancing the film upon several occasions.

It’s a shame when every aspect of a movie excels except its screenplay. For every legitimate moment of What Dreams May Come, there is another of cheap tearjerking and unfulfilled potential. And yet, I don’t regret having seen it. There is something fearless about its manner of existence, and that is what must be admired. 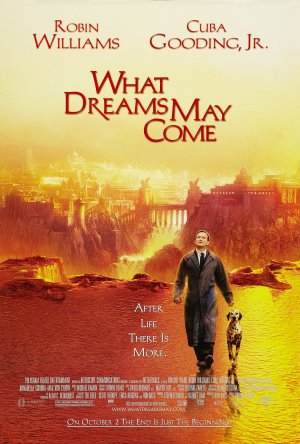