I am about to write a statement that I will probably never write again:

See this movie in 3D.

With Gravity, a confident case that 3D doesn’t have to be a gimmick has been made. With Gravity, the feeling of fear is real and powerfully expressed. With Gravity, there is evident proof in the potential of minimalist setup against an epic frame. With Gravity, you feel what is happening. This is a powerful, immersive experience. There is true terror, both thanks to superb direction and incredible acting.

There is a lot of plot, but I’ll only reveal as little as possible. This is something you need to see for yourself. Matt Kowalski (GEORGE CLOONEY) and Dr. Ryan Stone (SANDRA BULLOCK), are two astronauts sent up to do repairs to the Hubble Telescope. Suddenly, a misguided launch of a Russian missile strike sends debris launching into space, knocking out communications satellites around the globe, killing contact with Houston, and wrecking the shuttle, leaving, at first, Kowalski and Stone stuck in the immaculate blankness of space. (There is more – I promise – but it won’t mean as much if I tell you here).

While one might think just from reading the above synopsis that Gravity is about a botched space mission, at its center, screenwriters Alfonso and Jonás Cuarón have written a film that deals with one of our greatest and most unanimous fears: abandonment. (I might write a stray observation soon for those who viewed the film where I try to explain how this is placed in the movie in more ways than one.) In reality, despite the blockbuster budget and the setting in space, this movie conveys a powerful sense of claustrophobia. The most featured performance here is undoubtedly of Bullock’s (for reasons that I’d rather not spoil), and if there was an Oscar-worthy performance to be found in a CGI-heavy movie, this is it. She must convey many emotions in this 90 minute movie, and she handles it with professionalism and raw feeling and power. Carrying a movie of this size, essentially alone, is no easy task on an actor. (That’s not to say that Clooney as Kowalski and Ed Harris as the Mission Control voice over aren’t welcome either – it’s just that at the end of the day, it’s Sandra Bullock’s character who really matters.)

There’s only one proper way to watch Gravity, and that is in a theater and in 3D. Taking off the 3D glasses a couple of times during the film, I observed a notable flatness and distance to what was happening on screen. The 3D is technologically superb, the atmosphere is surreal, and even the smallest details are dealt with in the highest form. The cinematography by Cuarón regular Emmanuel Lubezki does wonders, with occasional POV shots early on, especially in the immediate aftermath of the debris hit. The 10 – 15 minute shot that starts the movie off is pretty great as well, and traditional shots placed in as the adventure moves on are good. As I’m writing this review, I’m listening to Steven Price’s brilliant score. It was noteworthy with the film, but to listen to it isolated is a greater experience. It almost succeeds in telling the movie’s story by itself. It moves perfectly with the film, and is awe-inspiring and massive from its very style and creation.

Gravity features no complex storyline frills. There really isn’t any possible symbolism until towards the very end. A movie that has enough strength working for it in the acting, writing, and technical fields doesn’t need to cram in any more stuff – at its length, it would only backfire. This, indeed, is a masterful entry of the chronicle that is 21st century filmmaking. It must be seen to be known, and when known, won’t be forgotten. 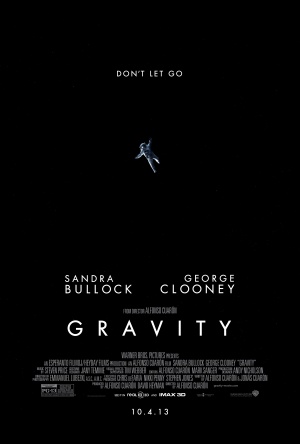