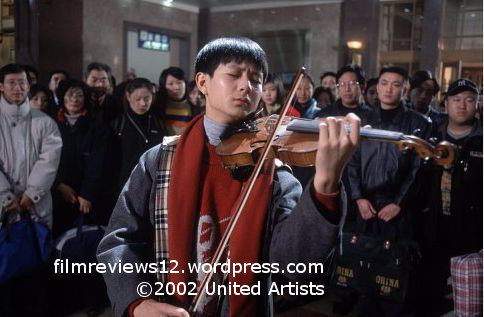 Together is a beautiful movie, as the violin is a beautiful instrument. Few American films I’ve seen lately have as much passion, emotion, and heart that this one contains. This Chinese production from 2002 has its moments, quite a few of them, and good qualities come together to make a full bodied movie, which is certainly a crowd-pleaser, but a well made crowd pleaser.

It concerns Liu Xiaochun (TANG YEN), an adolescent violin prodigy, living in a small village with his father, Liu Cheng (PIEQI LIU), a chef. Xiaochun and Cheng travel to Beijing, where they hope to find professional outlets for the kid’s musical talent. There, they find a host of characters, including the eccentric Professor Jiang (WANG ZHIWEN), Lili (CHEN HONG), a well-intentioned young woman who has lived off the money from her romantic partners over the years, and another professor, played by director Chen Kaige.

Chen, a well-established Chinese filmmaker (Farewell My Concubine, 1993), knows how to shoot a scene. Together has confident lighting and appealing set design. The music, composed by Zhao Ling, while repetitive, is compulsory for a drama. The acting is spotty. While the professional actors, such as Peiqi, are full and brilliant, Tang cannot say the same. He was picked because he was a professional violinist, not because of established acting talent.  When someone, usually Xiaochun, plays the violin for a competition, it’s among the strongest parts of the movie. Chen photographs them magnificently. Because of its merits, it has the biggest impact on you afterwards.

Together cannot be appreciated by anyone who hates melodrama. It is a factor throughout the entire movie. In some scenes, it is a subtle background player. In others, it is full force. Melodrama is not a bad thing when the filmmakers know where it belongs. It is a valuable tool, and it is too often abused. Together is not perfect at using it, but I have yet to see a movie that has no trouble pulling the right amount of melodrama in at just the right time. However, when it comes to practice of the material, Together does a fairly good job.

And this a good movie. Hitchcock said that he liked to play his audience like a piano, and to avoid an outburst of fists thrown through monitors and collective loud exasperated groaning, I will avoid the obvious joke about the central instrument here. Together is well worth your two hours, if you wish to be enlightened and pleased in a way few domestic dramas in the past few years can say they have. 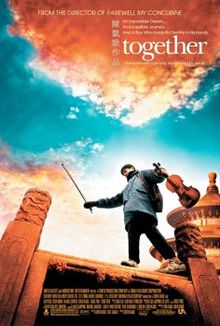