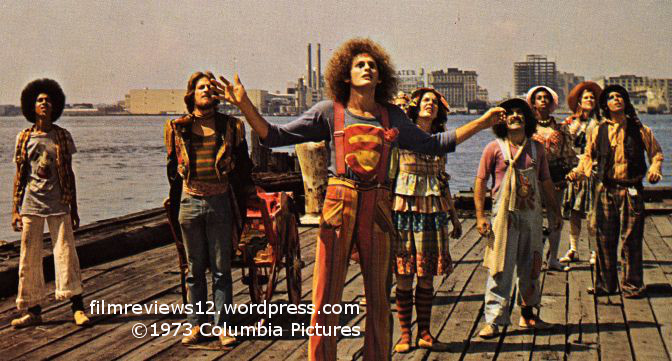 Is this review poorly written? Yes. The first paragraph was written on March 30, 2013 and the rest was written April 27, 2013, going off a handful of notes jotted down during viewing. I’m nearly embarrassed to have it published.

Godspell, a 1973 adaptation of an off-Broadway musical, has an objective to combine three things: parables, music, and vaudeville. There could possibly be more, but they didn’t show. The most obvious thing about this movie is its energy, which it appears to have an endless supply of. It also has a fair stock of well balanced folk music, although I can’t say I can remember any specifically when writing this review.  There really is no plot in the cinematic sense of the word. We have a bunch of mostly nameless New Yorkers following a man presumed to be Jesus around the city one day, as he runs down various parables contained in the book of Matthew (see the film’s subtitle). Each is reinforced with a song until we get to the movie’s end, the crucifixion, or at least, a rock opera version of it. That’s not a spoiler.

I can’t say I really have a lot to say about Godspell, even though it has a lot to say about existing. It occupies a dream world flawlessly, you know, the kind of universe that exists when you’re dreaming, and everything makes sense. Everything. If you watch the movie, you’ll understand what I’m saying. And even though I can’t really remember the music, the movie would have probably felt much lesser and worthless without it. It’s a vital part of the film, mostly because it is indeed based off of a musical itself. It also helps that I can remember the actors could sing quite well.

I mentioned that this movie is filled with energy, and that’s clear right from the start of the 103 minute feature. It’s a fun spectacle, never ceasing at maintaining the attention of its viewing audience, whoever may stumble across this movie.

Godspell, however, may be too energetic for some, to the point where it becomes nearly patronizing. I could definitely sense moments like this, but thankfully, they were kept to a reasonable minimum. There’s always a risk when an avant garde project like this is brought to the screen.

But in the end, Godspell is a well made movie. Yes, it looks bloody absurd, and sometimes that’s a cause of (un?)intentional humor. Yes, the movie itself is more or less inexplicable, and yes, many readers probably clicked away in disbelief when reading the words “parables” and “vaudeville” in the same sentence. But it’s a movie that should be viewed at least once, as it sort of sneaks in with the other Bible-related musicals of the early 1970s, like Jesus Christ Superstar or Joseph and the Amazing Technicolor Dreamcoat. It’s a part of the time period, and should be viewed as such. 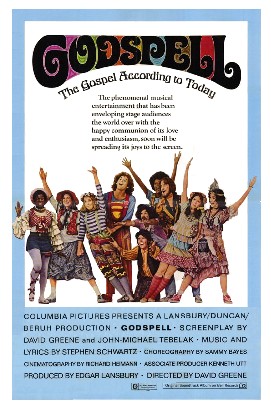