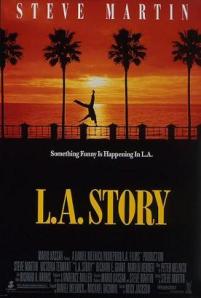 L.A. Story has a dreamlike quality to it that makes it one of the most beautiful and magical love stories ever put to film.  Deeply intense in its visual splendor, timely in its comedy, rich in its romance, L.A. Story is, in my opinion, one of the finest films ever made, which seats it firmly in my top ten list of favorite films.

Harris Tellemacher is the Wacky Weatherman for an L.A. TV station, but is disillusioned with his life.  A Ph.D. in Arts and Humanities has failed to put him in the station that he feels he deserves.  Everything around him is false and contrite, including his relationship with his girlfriend of three years.  Then he meets Sarah, a journalist from London who is writing a story about L.A., and his entire life is turned upside down.  He goes on a date with SanDeE, a girl from a clothing shop, then breaks up with his girlfriend when he finds out that she’s been cheating on him with his agent.

His new freedom from his relationship gives him reason to approach Sarah, the woman he feels he cannot be without.  Through a series of blunderings it appears that they are never to be, but in the end, love and the weather conquer all.

I’ve always said that I’m not a huge fan of romance films, and yet it seems there are quite a few in my top ten.  L.A. Story is surreal at times, flowing in like the tide, crashing like a wave on the beach, flickering like a candle, roaring like a fire.  It’s passionate and tender.  It’s also immensely funny, with some of the jabs that Steve Martin takes at life in L.A.  He paints the city as a pretentious place where everyone is too important to be anywhere on time, where no one can walk to destinations no matter how close they are, where above all else, appearance is the most important thing and must be upheld at all times.

Speckled with an array of stars, L.A. Story is a film that is greater than the sum of its parts.  The comedy is extremely funny, the romance is deeply touching, the imagery is awe-inspiring, even the music lends a soft lyrical quality to the film.  Put these things together and you have one of the greatest romance/comedies of all time.  I highly recommend it to anyone who has never seen it, and even to those who have.