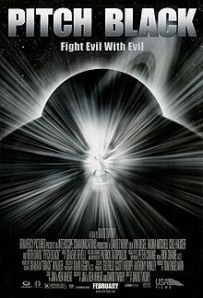 As an avid fan of both Sci-Fi and Horror films, I was really pleased with Pitch Black, a scrumptious film which incorporates all my favorite elements of a good film: story (always story first!  Remember that!), direction, acting, cinematography, music, and of course, the big budget.  Well, I don’t know about the budget of this film, but the rest of the elements are definitely there, and it at least gave the illusion of a big budget if it didn’t have one.

First of all, it featured Vin Diesel as Riddick, an escaped convict who’s been captured and is being transported back to prison by a bounty hunter.  Now, Vin Diesel had certainly made his mark.  He impressed Steven Spielberg enough to be cast in Saving Private Ryan (1998) as Private Adrian Caparzo, giving one of the most heart-wrenching and convincing death scenes I’d ever seen.  In Pitch Black, his character is darker and much more evil.  He serves as the antangonist and the narrator, as well as the hero.  The depth of his character is explored fully in his acting, and I’m sure he’ll get much more work out of this role as well as his Private Ryan appearance.

The story goes like this: a passenger space ship flies through the tail of a rogue comet, which throws it off course and causes it to crash land on a planet that seemingly has no night.  With three suns, two on one side and one on the other, it’s never dark.  The survivors discover the presence of underground beings who are vicious predators, swarming like piranha, but unable to face the light of day.  However, their safety in the daylight is about to expire, because once every 22 years (and, coincidentally, today is that day) the planets and suns align in such a way that it casts the entire planet into darkness.  Riddick, the murderer, suddenly becomes the pseudo-leader of the group because of his ability to see so well in the dark, having spent most of his life in subterranean prisons.  But the fear of sudden and irrevocable death from the darkness soon turns the survivors against themselves as they begin to get picked off one by one.

This film works on so many levels.  As a survival film, it fills the audience with a sense of hope that the survivors may make it off the planet alive.  As a Sci-Fi film, the technology and special effects are both believable and very realistic.  The computer animation sequences with the ship and the crash landing especially grip the audience from the start.  As an action film, its tense and hectic pace keeps the film flowing from start to finish.  And as a horror film, it’s every bit as scary as my favorite Sci-Fi/Horror film, Alien.  The filming is innovative, with the use of different colors setting the mood of the film so perfectly.  Really, I was not expecting it to be as good a film as it was, but I was duly impressed.  It’s definitely one I’d like to see again.