For about 80 minutes, Clue moves about in such a wonderful way that you suspect nothing can really go wrong. And then it does something at its end so unforgivable and terrible that A) It’s noticeable however you plan to view the film and B) Is really disappointing based on how well things were going before.

But first you’ll need some explanation. When it was first released into theaters in 1985, Clue had three endings filmed, reflecting the open ended qualities of the board game it’s based off. A theater would get an ending at random, and printed in the papers along with the screening times would be a letter, A, B, or C, representing which ending was being shown.

OK, what’s wrong with that? Well, if you’re seeing one ending, you’re still not seeing the entire movie. The Netflix copy I watched had all three endings tacked on, and the thing I noticed was that there was no tension when the resolution resets itself every few minutes, and this happens three times. Really, by having more than one ending upon the film’s theatrical release, you’re ruining your movie either way. And that’s a shame. The movie up to then was really good. And the endings themselves are very funny, showing the eccentric butler (TIM CURRY) running the group around the giant Hill House explaining in rapid fire how the murderer committed the crimes.

Set in 1954 New England (the period setting really only comes into play a handful of times), several people, all with relations to the government, are invited to dinner at the mansion. They don’t know who runs the house, or who invited them there, or who the other people are. They’re all given aliases upon entrance, which of course they are the names of the characters in the game. The cast is great,  with people like Curry, Eileen Brennan and Christopher Lloyd. And alongside that, there are many good qualities for this film. The script, acting, and everything down to the lightning striking whenever something ominous happens has a kind of a corny charm to it, and I can understand its large cult following.

What I can’t understand, however, is who really thought it was a good idea to have three endings. When your movie is going that well beforehand, an error like this is really upsetting. Regardless, Clue is a movie you pretty much should to see once. One of the main attractions to this movie is watching the mystery unfold before you, and that’s really lost upon repeat viewings. If you’re given the option of only watching one ending, none of them really have advantages over the others, so just pick one at random. 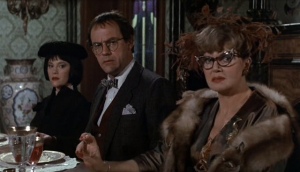