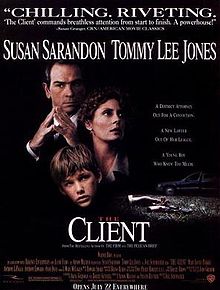 The much-anticipated follow up to John Grisham’s The Firm and The Pelican Brief was also a much-anticipated film on the heels of the two previous films.  Rumor has it that Grisham sold the rights to his next book before it was even finished.  The Client stands alone in its own right, being the rarest of all films: the film that follows the book almost to the letter.

Enter the US District Attorney with even higher political aspirations.  Convinced that the boy knows where the body is, he starts hounding the boy and trying to get the information out of him.  The boy recruits the help of a lawyer named Reggie Love who, while not a prominent lawyer, is willing to work very hard to make sure the boy’s rights are observed at all times.  Meanwhile, the Mafia send a warning to the boy that if he should tell what he knows, that his family and he would be killed.  To seal the deal, they burn down his trailer.  As with the previous two Grisham novels, the pace rises to a fever pitch until the end when it seems sure that there is no way out for the hero, who then slips the bonds and quickly makes his getaway.

The acting is fine throughout, with standout performances by Susan Sarandon and Tommy Lee Jones.  When she gets him on the ropes in their first meeting, it’s a pretty comical situation, and although it’s rare to see Jones squirm like that, he did it like the lowest of worms.  The supporting cast was also very good, but these two stars shone above the rest.

As a fan of Grisham’s first three books, I found the fourth book fairly rudimentary.   However, the movie was exciting and gripping from beginning to end, and as I said before followed the story almost word for word.  And even though I was disappointed in the book, the movie excited me.  Taken as an entity all to itself, it was an extremely riveting and suspenseful film, even though the ending was pure Hollywood.  It was almost as if Grisham knew that this book was going to be a film and wrote it that way.  Regardless, it’s a tremendous film, thoroughly enjoyable from start to finish.  I give it my full recommendation.