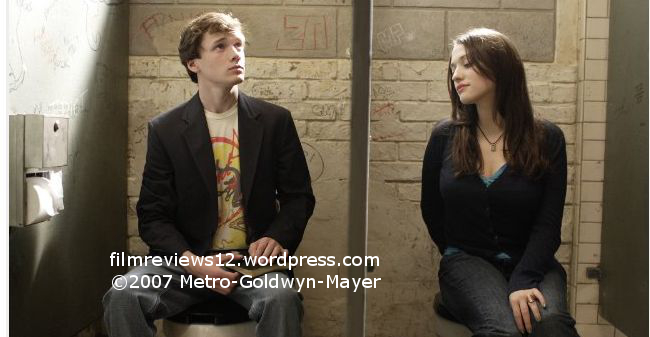 Chances are, if you’re familiar with 1980s teen movies, Charlie Bartlett may seem all too predictable to you, but there is some muted brilliance to be had. The title character, rich kid Charlie Bartlett, is very clever and appears to have a thing for causing mishaps. After being kicked out of yet another private school, he’s sent to a public high school, where he becomes some sort of a prescription drug dealer to the kids, and that being how he gains popularity. He starts dating the principal’s daughter (KAT DENNINGS), much to the ire of the alcoholic principal (a brilliant performance from ROBERT DOWNEY, JR.). The title role would be a dream for any young male actor, with a wide variety emotions to show off to potential future casting directors and thankfully, it was given to someone who can play it well. Anton Yelchin works magnificently here, not to Downey’s extent, but still commendable (a climactic scene involving Downey, Yelchin, a gun, and a swimming pool comes to mind). The main issue with the script, however, would be that in calling it a comedy-drama, which it very much is, there’s a horrifying blow to the viewer’s head between a light comedy scene and a serious drama sequence. With no transition, it’s very off-putting. Still, it’s a good film, and worth checking out.